After an extended summer vacation, Erstwhile returns with its first post of the 2015/2016 AY. Kathleen DuVal (Ph.D., University of California, Davis) is a professor of history at the University of North Carolina at Chapel Hill. Garrett Wright, one of DuVal’s graduate students at UNC, chats with DuVal about her latest publication: Independence Lost: Lives on the Edge of the American Revolution (Random House, 2015).

Erstwhile Blog: Your first book, The Native Ground: Indians and Colonists in the Heart of the Continent (University of Pennsylvania Press, 2006), is about power and relationships between various groups of people in the Arkansas River Valley. How did you get from that project to this one?

Kathleen DuVal: In the course of my research for The Native Ground, I came across these battles at Mobile and Pensacola. I started to look for secondary sources about these battles and I discovered that there really weren’t many. This was a part of the Revolutionary War that people didn’t know much about and I kept that in the back of my head, and when I was thinking about what to write for my second project I went back to that idea. 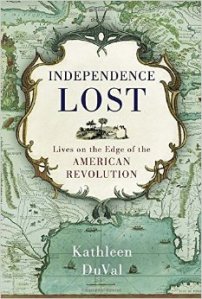 EB: What was the process of writing your second book, in comparison to writing a dissertation and then turning it into your first book? How long did it take to write Independence Lost?

KD: I thought it would be a lot easier because I knew how to write a book and I figured it has to be easier the second time around. And, in some ways, that was true. I didn’t worry as much early on about what the argument was. I understood more about structure and what kinds of chapter divisions might work and things like that. But often what’s different for an academic when writing a second book is that the first book is your dissertation. You have a dissertation committee and, even if you’re TAing, there are usually just two things you’re working on in your work life: your dissertation and whatever teaching obligations you have. For the second book, if you’re lucky enough to have an academic job, you have a bajillion other things that you’re working on, including everything faculty members do to run their departments and universities. And there is a lot less devoted time to work on research. When I was writing my dissertation, there were many days when all I did was work on my dissertation, but there weren’t that many full days to work on this second book.

So it took me about the same amount of time, even though in some ways it was easier. It took me 10 years, from the first research trip to the book coming out.

KD: I wanted to focus on people who usually aren’t part of the story of the American Revolution. I feel that, in colonial history, we’ve really spread out in the last few decades. Historians have really expanded what colonial history means — we’ve spread it farther in time, spread it west across the continent, fully included native peoples, Africans and descendants of Africa, and the French and the Spanish, but then the American Revolution historiography just zooms back in on the thirteen British colonies that rebelled.

So I wanted to look at a place and people who were different from that, and I wanted to concentrate on people who weren’t the Founding Fathers but still use the stories of individuals to bring in readers in the way that Founding Fathers stories do. Americans love to read stories about the Founding Fathers, and I completely understand why: they’re fascinating men who did important things. So I wanted to use some of the same kinds of narrative techniques and pull that I think those men have on readers and Americans, but then introduce readers to different kinds of people: some women, Native Americans, an African slave, and other people whom they might not have heard of.

EB: How did you decide which individuals to include in your narrative? Did you find them all in the archive, or did you have some in mind from the very beginning?

KD: I knew I wanted Alexander McGillivray because he was literate and — unlike almost all Native Americans of this period — wrote letters. He described what he meant by nationhood and his visions for the Creeks’ future. So I knew from the beginning that he would be one of the characters, but the others came over time in the archives, as I came across interesting stories. For example, I found Petit Jean in the correspondence between different Spanish officials. I started reading that they were referring to this slave who was running errands for them and spying for them, so I started keeping notes on him. Then I found him in a census later and a couple other documents, so I was able to build a story around him even though the information about him was much less than what I had on someone like McGillivray.

EB: Which individual was the most challenging to research and write?

KD: I think the whole issue of getting women in the story was the most difficult. I really wanted to have a Choctaw woman as a character. I knew there were Choctaw women and children in the fort at Pensacola, with Isabella Bruce (who is one of my characters), during the siege of Pensacola. And I didn’t need much on one of these Choctaw women. If I’d had the name of one of them, or even the name of her husband, brother, or father whom she was there with, who was fighting, I could have spun a story around her with the other things I know about Choctaw women and Choctaws in general in this era. But I couldn’t find that much. There was no individual Choctaw woman I could find to bring a story alive with.

And the two women I do have — an Irish woman (Margaret O’Brien Pollock) and a Scottish woman (Isabella Bruce) — ended up on the Gulf Coast during the Revolution but the evidence for both of them is very thin. I don’t have anything that Isabella Bruce wrote; I have her husband’s letters. And I thought I didn’t have anything written by Margaret Pollock but, very late in my research, I came across letters that she and the governor of Louisiana wrote in a very heated back-and-forth, which was just a wonderful find. I had thought she might be in the book before, but that sealed it.

EB: Do you have any advice for other historians who want to recreate the stories of people with a limited source base?

KD: I would go back and read Natalie Zemon Davis. She taught us how to take a little bit of information from the archive and build a story around it that is still a historian’s story, that’s informed by other real sources but in the absence of a lot of sources about one person. And the reason we want to do that is because there are people who are important in history who didn’t leave as many records as the literate men who left their mark in the archive.

EB: This book is organized very effectively. You devote the first chapter to the place itself, which grounds all of these stories in the Gulf Coast, and you then have introductory chapters for each individual you follow throughout the book. How did you come to organize the book in such a compelling way?

KD: I struggled for a long time over the question of whether the separate chapters introducing the characters in the first part would work or not. I wanted to do that because I wanted the individuals to come alive from the very beginning, and I wanted to introduce the history of each of their peoples before we get to the Revolution. So I wanted the reader to learn about the Creeks, about the Chickasaws, and about what happens to the Acadians, but each of those chapters became chapters where I told the whole story of, say, French colonialism. If you had read that version of the manuscript you would have gotten so confused and worn out by the time you got to the third or fourth of these introducing chapters that you would stop reading before getting to the Revolution. So I whittled them down from around 50 pages to the length they are now [10-15 pages], because they needed to do a lot of work in explaining who the person was, why he or she was there, and what the history of the larger group was, but do it quickly enough that you didn’t lose track of what I was doing or take too long to get to where I start to weave them together, in part two.

EB: Much like your earlier work, Independence Lost is an engaging read that could appeal to a popular audience. Do you have any writing tips for young historians? How do you create a compelling narrative without losing sight of analysis?

KD: Revise, revise, revise! You just have to work on each sentence, each paragraph, after you’ve written it. Work on every sentence, imagining that you are the reader and you don’t know anything about the topic and you’re apt to put it down if you get bored or don’t understand it. Write for that person, and re-write, and re-write.

EB: How many drafts did this book go through?

KD: Countless. My first draft is unreadable by anyone but me, and it has huge blocks of primary sources that I’ve just pasted in that aren’t integrated. It would be a disaster to have to read that. I wouldn’t show a chapter to anybody until it was in at least the fifth draft. The final version — I can’t even count how many drafts that would be.

KD: This goes back to your character question. Originally, the two characters I was sure I wanted to use were Alexander McGillivray and Bernardo de Gálvez. My editor read my first full draft that I was ready to share with him and his biggest suggestion was to make Bernardo de Gálvez, the Spanish general, not be one of the main characters. He said that Gálvez was just taking over, and too much of the volume of the book was about him. I just knew so much about him — he was a person who wrote multiple letters every day and he was just too much.

So now I want to write a joint biography of Gálvez and his wife, Marie Felice de Saint-Maxent, a French Louisianan. They married after Gálvez got to Louisiana and then, after the war, he was promoted to viceroy of New Spain, so they went together to Mexico City and were hugely popular there. They were sort of the power couple of the 18th century in Mexico City. They would ride around Mexico City in their open carriage with their toddler in his military uniform. And then Gálvez died suddenly, and there were rumors that he’d been poisoned by the crown because he was leading an independence movement. Then Marie Felice goes to Spain where she’s hailed as the widow of this war hero, but then the French Revolution breaks out and she is condemned for being too French, so she gets expelled and goes to Italy. So it will be a biography but it will also be a larger story about empires and the global age of revolutions. I hope this one won’t take 10 years, but we’ll see.

One thought on “Rethinking American Independence: An Interview with Kathleen DuVal”