Erstwhile guest contributor Nick Johnson shares some historical context on the history of marijuana in the Centennial State. Nick is the author of the forthcoming book Grass Roots: An Agricultural History of Cannabis in the American West (Corvallis: Oregon State University Press, 2017). Known to the internet as “The Hempiricist,” he also blogs at Hempirical Evidence and tweets under the handle @TheHempiricist.

On August 3, 1876, two days after Colorado joined the Union as the thirty-eighth state, the French drug company Grimault & Co. ran an ad in the Daily Argus of Rock Island, Illinois, claiming that its “Indian Cigarettes (of Cannabis Indica) are a sovereign remedy for asthma.” The price was seventy-five cents per box. The August 3 ad had been running all year in the Argus, and Grimault & Co. had been running similar advertisements in other American newspapers since at least 1868.

Grimault & Co.’s cigarettes actually only held a tiny amount of cannabis extract—probably grounds for false advertising by today’s standards, and certainly not enough to get anyone stoned. But the French company wasn’t the only one plying the American public with cannabis during the nation’s centennial. Earlier that year, Philadelphia-based Craddock & Co. claimed that its namesake physician cured his only son of consumption with “a preparation of Cannabis Indica.” “There is not a single symptom of consumption that it does not dissipate,” the ad claimed. 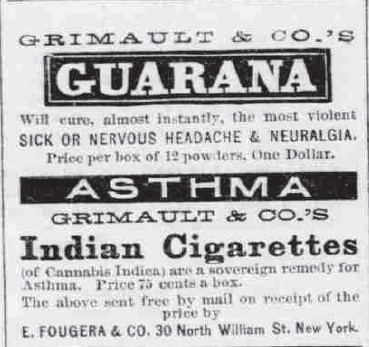 The French pharmaceutical company Grimault & Co. ran an ad for “Indian Cigarettes” in American Newspapers during the late nineteenth century. The cigarettes contained only trace amounts of marijuana and were advertised as a cure for asthma. (Daily Argus (Rock Island, IL), August 3, 1876).

Cannabis, an annual herb whose drug product is popularly known as marijuana, may have a wealth of medical applications, but curing asthma and tuberculosis are not among them. The drug companies might as well have been hocking snake oil.  Their 1876 advertisements nonetheless demonstrate that when Colorado became a state, cannabis was a legal medicine in the United States. Part of the American pharmacopeia since 1851, cannabis production and consumption would not be banned in the Centennial State until 1917. So as much as people like to refer to the recent change in Colorado’s cannabis policy as “legalization,” the historian can’t help but offer a corrective: it’s more like “RE-legalization.”

By the time companies like Grimault & Co. were advertising cannabis, the plant’s psychoactive effects were well-known among the American medical community. But those effects didn’t seem to bother many people until after the turn of the twentieth century, when Mexican immigrants began arriving en masse to work on farms and railroads across the American West. That’s when Americans, especially those who lived near the border, began looking with disdain upon the psychoactive effects of “marijuana,” a colloquial Mexican term that actually has roots in Angolan, Portuguese, and Spanish.[1]

Smoking marijuana wasn’t all that popular in nineteenth-century Mexico; it was actually widely frowned upon, especially by cultural and political elites who regarded it, along with alcohol, as a degenerative vice that prevented their nation from achieving the standard of “civilization” set by the United States and European nations. But marijuana use was not uncommon among the lower classes and more marginalized Mexicans, such as soldiers, prisoners, indigenous people, and farmers.[2] These groups used the drug recreationally and as a traditional remedy for various ailments. After the turn of the century, many of these people moved north, either displaced by Mexican dictator Porfirio Díaz’s oppressive policies or fleeing the turmoil of the revolution that overthrew him after 1911.[3] As historian Isaac Campos points out, most of what Americans learned about “marijuana” during this period came from Mexico, often directly from the elite-run Mexican press.[4]

A typical example was a 1904 article in Telluride’s Daily Journal, reprinted from the Mexican Herald. Warning Coloradans of a “Dangerous Mexican Weed to Smoke,” the article included many of the typical Mexican stereotypes about marijuana use: it declared that two marijuana smokers had “ran amuck” on Mexico City’s streets, picking fights and proclaiming themselves to be the “bravest men on earth.” The pair eventually wound up in straightjackets, in danger of losing “their minds permanently.”[5]

Over the next three decades, the legitimate drug “cannabis” slowly morphed into the harmful vice “marijuana” in the American popular imagination. Public attitudes about marijuana coalesced around these common Mexican stereotypes, which were noisily repeated by the American press and meshed well with the common belief among Americans that Mexicans were inherently backwards people.

Authorities and the press also applied these stereotypes to black Americans who began picking up the “reefer” habit after the turn of the century. Marijuana was especially popular among black jazz musicians, as well as their mixed-race crowds, drawing the ire of the nation’s conservatives and officials.

In addition to Mexico, Americans also traced the origins of drug cannabis to “the Orient,” a mythical conception of the Middle East and India where sensual brown people indulged in mind-deadening “hashish” drawn from a “Cannabis Indica” or “Indian hemp.” This belief also came with the assumption that “Orientals” misused a variety of the trusty European hemp as a drug. For example, A.D. Catterson, chief narcotics officer for the Colorado State Board of Health, told members of the state’s Junior League Clubs in 1938 that “Cannabis is an Oriental plant … We are told that it is native to Persia and cultivated in India … Its narcotic effects are referred to even in the Arabian Nights tales. Originally it was introduced into America as a hemp crop for uses in manufacture of rope and twine.”[6]

Although there was quite a bit of racism swirling around Americans’ perceptions of marijuana after 1900, many of the first state bans on the plant, including Colorado’s, came as part of broader anti-vice crusades during the Progressive Era. Officials worried that cannabis might replace other restricted substances, such as alcohol, which Colorado lawmakers also curtailed in 1917.[7]

By the 1920s, more working-class Mexicans and Mexican Americans arrived in Colorado to work in the burgeoning sugar beet industry and other jobs. Marijuana use may not have been all that common among them, and since smoking the drug is a relatively clandestine activity, it is difficult to know whether non-Mexicans picked up the habit. What we do know is that during this time, authorities began seeing marijuana as a problem unique to the state’s Mexican population. For instance, in 1921 Harry V. Williamson, chief of Denver operations for the Federal Bureau of Narcotics, offered the unsubstantiated opinion that “when Mexicans fight each other, they are apt to be full of marijuana.”[8]

Troops from the Rocky Mountain Arsenal attempt to burn a field of cannabis with flamethrowers in Denver in 1951. The GIs put the heat on the stubborn plants for more than an hour before being thwarted by the “damp green weeds.” (Don Sterling, “Flamethrowers fail: Marijuana defies GIs,” The Denver Post, August 21, 1951, p. 3).

Federal cannabis prohibition came in 1937, with Harry Anslinger, commissioner of the Federal Bureau of Narcotics, leading the charge. During the hearings for the Marijuana Tax Act, Anslinger submitted racist testimony from the editor of the Alamosa Daily Courier, who lamented that, “I wish I could show you what a small marihuana cigaret [sic] can do to one of our degenerate Spanish-speaking residents.”

Even though Anslinger and other authorities were convinced that cannabis was a Mexican scourge, the first person to be charged with selling marijuana under the new federal law was a white Denver resident, Samuel R. Caldwell. On October 8, 1937, US District Judge J. Foster Symes sentenced the fifty-eight-year-old Caldwell to four years in prison and gave twenty-six-year-old Moses Baca, a Latino who confessed to using marijuana, eighteen months. These sentences were the first in the nation to be issued under the Marijuana Tax Act.[9]

Corn and cannabis thrive under similar conditions, and marijuana farmers in Colorado have used maize as a shield for their clandestine crop for more than a century. This illustration comes from a 1986 Rocky Mountain News article about farmers growing marijuana to make up for low commodity prices. (Deborah Frazier, “Pulling up pot plants pushes up price,” Rocky Mountain News, October 6, 1986, p. 18).

The federal ban on cannabis did little to stop cultivation in Colorado, where people planted it along irrigation ditches and in cornfields. In Walsenburg in 1937, Huerfano County sheriff Claud Swift found an estimated $5,000 worth of cannabis growing in “patches being hidden in corn fields.”[10] In June 1946, Mexican beet farmer Manuel Hernandez was nabbed for growing some 7,000 cannabis plants amidst corn on a farm he leased near Mead.[11] Stories like these demonstrate cannabis’s fundamental connection to agriculture in Colorado, as the state’s irrigated landscape not only allowed for profitable crops such as corn and sugar beets but also marijuana.

The agricultural history of cannabis in Colorado, as well as in many other parts of the arid West, serves as a reminder that, while it may be a controversial drug in need of stringent regulation, marijuana is also a crop with its own set of water needs in an arid region where climate change already threatens the agricultural water supply. Although it may seem obvious that cannabis is a plant, marijuana’s status as an illegal federal drug has limited regulators’ ability to see it as a crop. For example, the Colorado task force charged with developing a plan to implement a voter-approved legal cannabis industry in 2013 published an exhaustive 165-page report—and not once did it mention the word “water.” Fortunately, this perception is changing. The Colorado Department of Agriculture now regulates pesticides used on cannabis, and Denver Water’s conservation manager was recently impressed by cannabis growers’ efficient water use.

Remembering Colorado’s cannabis past may help us better recognize other pressing issues related to re-legalization, as well. While cannabis proponents touted legalization as a way to end the disproportionate persecution of minorities under historically racialized marijuana laws, racial disparities persist after legalization. While minority communities have indisputably benefitted from a steep drop in marijuana possession arrests after legalization, young black and Latino Coloradans are still arrested for underage marijuana use and possession at egregiously higher rates than young whites. Meanwhile, blacks and Latinos are largely shut out of the legal cannabis industry, as some 84 percent of Denver dispensary owners are white. These disparities reflect cannabis’s racialized history in America and remind us that, although Coloradans should be proud of shutting down a major part of the disastrous War on Drugs, we still have a lot of work to do to ensure that the benefits of legal cannabis are shared more equally by all citizens of the Centennial State.

William Breathes (pseudonym), “A History of Cannabis in Colorado—Or How the State Went to Pot,” Westword, November 1, 2012.

[3] For discussion of Porfirio Díaz’s oppressive push for modernity in nineteenth-century Mexico, see Alejandro Tortolero Villasenor, “Transforming the Central Mexican Waterscape: Lake Drainage and its Consequences during the Porfiriato (1877-1911),” in Christian Brannstrom (ed.), Territories, Commodities, Knowledges: Latin American Environmental Histories in the Nineteenth and Twentieth Centuries (London: Institute for the Study of the Americas, 2004), 121-5.