This week, Erstwhile contributing editor Kerri Clement sat down with historian Dr. Coll Thrush from the University of British Columbia to talk about the process of writing and researching not-so-hidden histories found in his works, such as Indigenous London: Native Travelers at the Heart of Empire (2016), Native Seattle: Histories from the Crossing-Over Place (2007), and his current research on shipwrecks on the coast of the American Northwest. The interview has been edited for clarity and length.

Erstwhile acknowledges that this interview was conducted in the homelands of the Tsitsisistas (Cheyenne), Inun-ina (Arapaho), Nuche (Ute), and Other Indigenous Peoples and Nations.

Erstwhile Blog (EB): Thank you for sitting down with me today! Can you talk a little bit about your research process in trying to uncover unconventional or buried stories?

Coll Thrush (CT): One of the things about the London project that was really interesting that I write about in the book was, you know, my assumption that what I would be doing was a hidden history. In fact, it’s not hidden at all; these people were highly visible. So what I’ve learned to do is to be prepared to be surprised. That kind of goes without saying, but it needs to be said that one of the great gifts of archival research is that the data, so to speak, can radically undermine what we thought was going on. I fully expect that to be the case with this new project, as well.

For this new book on shipwrecks, I had to write a narrative table of contents. And I’m sure in a few years, I’m going to look back at that and just roll my eyes. You know, in terms of my research and writing process, though, one of the things that’s really important for me is to have it be a very holistic, full-body kind of experience. And so I do a lot of place-based research in the sense of walking the city that I’m writing about. For this next book, I’ll be hiking part of the West Coast Trail, and Vancouver Island, because there’s a shipwreck on the beach there that I want to actually see and touch—that kind of embodied experience.

Photo by Pixabay on Pexels.com

Then, in terms of writing, I’m not one of those people that has kind of a writing schedule that I keep to; it kind of comes in fits and starts. But one of the things I try to do, I’m synesthetic. So my senses are kind of bundled up in a weird way. So I use a lot of sonic and olfactory triggering when I’m writing. The London book has a particular pair of smells that I used when I was writing that I would make sure that I was smelling. And I had playlists of music for each chapter. And to just sort of try to create more of an immersive experience. I’m still developing those for the wrecked ship project. But you know, anything to kind of alter my consciousness a little bit to kind of get in the zone. And again, as I’ve said before, I’m a pretty ritualistic person. I enjoy having those kinds of rituals around reading that kind of settle me down, and then I write pretty stream of consciousness, and I don’t get caught up in the footnotes and stuff. I just tell the story. Then I go back and clean it up. Writing comes really easily to me. I am so grateful for that because that’s not the case for everybody. Something Bill Cronon has talked a lot about, that we really are in the business of storytelling more than other disciplines. Sometimes that can be quite critical. The problem is to be critical while we’re storytelling, but we know that is what we do—we tell stories, and I think we have a responsibility to tell them well.

EB: Do you feel that this business of storytelling in some ways intersects well with Indigenous Studies?

CT: Yeah, I mean, there is the whole practice of storytelling in indigenous communities where that is relevant, I think, particularly for indigenous scholars in the field. But, you know, for me, settler colonialism is always about the land and the land tells stories. And those can be stories of indigeneity, of settlerhood, that to tie those stories to the land. I think it’s really critically important, whether that’s at the Tower of London or downtown Seattle, or wherever, to really tie our stories to place. For the Seattle book, and every book, I end with a question. The Seattle book ends with “what happened here?” And that’s the most basic question we can ask as historians, “what were they thinking?” “What was it like and what happened here?”

So for me, it’s always bound up in place, and place allows us to tell certain kinds of stories. I have almost kind of a mystical approach to it in the sense that I do feel like places have agency and that comes out of environmental history. That also comes out of indigenous teachings, out of Gaia theory, and out of so many different directions of thought and research: the idea that places actually have agency and can be teachers. 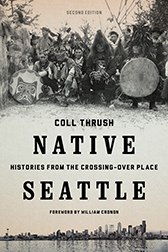 EB: I really enjoy reading about Indigenous place as well as thinking about how landscapes can be a teacher.

CT: Yeah. What it does is puts us in a position of humility, which I think is really important. Academics are not always the most humble people because we still have a fantasy in our discipline, of mastery, an expertise and I’m less interested in that. I mean, I recognize that I’m perceived as having expertise in certain things. But I think I’m more interested in being kind of a more advanced learner within academic circles. So, a lot of my thinking and writing is about, well, what if we tried telling the story of settler colonialism as a failure? If we assumed that, how might that change our story, because, you know, look what it’s done to the land? It’s not turned out well.

EB: In reading Indigenous London, I was really struck by how the poetry interludes really brought about that sense of humility by trying to fill in archival silences. Can you talk more about that?

CT: I think we can write about them instead of pretending like those absences aren’t there. What we can do is take them right up to the edge of them and say, “Look, what we can’t see.” I think that’s an important exercise and practice to run really explicitly up against the limitations of the archive. What I think is really important is that, particularly around the history of indigenous peoples, is that we not see it as an Indigenous lack of sources, but as the problem of the archive. That the archive is the problem, not some something wrong with indigenous culture, oral tradition, transmission, and all that kind of stuff. I think walking right up to the edges of the archive and kind of creating the shape of the thing that’s missing by approaching it from lots of different angles, then we at least get to see the outline of it. I think that it, as you say, puts you in a position of humility, because, you know, history is like this constant battle against oblivion, you know, and we all in our research know how much we can know.

I think that’s why it’s a big breakthrough for students, when they understand that history and the past are not the same thing. Because there’s the past, it’s like, all that stuff that happened, 99% of which will never know about, then history is what we make out of the debris. I wish that more people understood that, because I think, you know, if you look at the History Channel, or other things like that, [which are] so truth-obsessed. In fact, they’re missing the larger point and that’s where I think some of my learning and Buddhist thinking and so on has been really helpful in terms of thinking about impermanence and having compassion toward what’s been lost in toward ourselves—for struggling with what’s been lost. A lot of it has to do with really positioning ourselves affectively in relationship to the work. But that doesn’t mean we are in control of the material or of the lives that we write about, or the places we read about. We’re not actually in charge. But at the same time, we have a lot of power.

I have a really big interest in writing for broader audiences. And so using some of the techniques of fiction, you know, setting and character and all those sorts of things, and really trying to write in an immersive way. And that is something that people like about my work. And I will say, actually, one of the origins of that was when I started writing really, quite seriously when I was about 10 or 11. I also started gaming and playing Dungeons and Dragons, just about world creation. It seems kind of silly to talk about it. But it’s a hugely important part of my life, that that kind of intensely speculative, creative work that really informs how I write in an intensely speculative way. Because world creation could be some fantasy magical world, or it could be London in 1843 and Piccadilly Circus, and what did that look like, and sound like, and all that kind of thing. And those are not distinct processes.

EB: One of the things I’m struck by in your writing is how personable it is and how very transparent it is. How did you get to that point? Because we’re not trained like that.

CT:  No, we’re not. Well, sometimes we kind of are. I was told by my Ph.D. supervisor, Richard White, to write my dissertation as the book I wanted. But I am not very present in that book in an explicit way.

Partially it’s getting tenure when you can start to play with conventions a little bit. It’s having read memoirists and essayists and literary nonfiction people, creative nonfiction people who sort of gave me permission to do that. And as I’ve gotten more and more involved in Indigenous Studies, where there is a call to position oneself in relationship to the work, it just felt more natural to do that. To have the first person in the text, I think, is, again, like you say, part of that transparency and honesty.

One of the reviews of the London book said that the interludes were accounts of the archival experience, and I really liked that. That wasn’t something I explicitly set out to do. But I did want to bring people into the archives with me, and so there is a personal impulse there. And I think that’ll be true, probably, for the remainder of my career. I just will probably continue to do that, because it just also feels like a more natural way of writing.

I think that would be one of the lessons or one of the things I would say to people starting out is to find your authentic voice, and know that that will take time. But the dissertation is one thing, the book is another, the second book is another entirely. So know that over time, you’re going to find your authentic voice. And for some people, that may be the more detached academic style of writing that may be where you come to rest as an authentic voice for yourself. But that’s not where mine is.

One thought on “Telling Not-So-Hidden Stories with Humility: A Conversation with Coll Thrush”