Maps have oriented humans in space for millennia. Today Alessandra Link adapts her recent American Society for Environmental History (ASEH) roundtable presentation for Erstwhile. Link reflects on the roundtable theme of Indigenous mobility and place by exploring how Western mapmaking served an expanding U.S. empire and, in turn, how Indigenous cartographic knowledge shaped colonial encounters in the U.S. West. Link’s capacious view of mapmaking offers grist for our contemporary mill, given that bordermaking and unmaking undergird ongoing confrontations in Trump’s America and across the globe.

“We know who we are and where we are only with reference to the things about us, the points of reference in both our immediate and infinite worlds, the places and points among which we are born, grow old, and die. There is in this simple cartology the idea of odyssey. And in odyssey there is story. Nothing is older than story in our human experience. Nothing appeals more to our human being.”

For Momaday, a celebrated Kiowa poet and author, Indigenous identity is intimately bound up in place, in points of reference that can be physical and/or spiritual in character. Movement to and through these places and across time amount to what Momaday calls a “simple cartology.” And in this cartology lies a story. I’m drawn to Momaday’s perspective because of the parallels he draws between cartography and storytelling. Both activities are wrapped up in placemaking and movement. In recent weeks, I’ve returned to a chapter draft from my dissertation that considers how Native peoples engaged with the five Pacific Railway Surveys that snaked across the Trans-Mississippi West in the early 1850s. What follows is my initial effort to re-conceptualize this chapter as a series of cartographic encounters between diverse Indigenous communities and the U.S. colonial agents sent to chart a course for the Iron Horse. 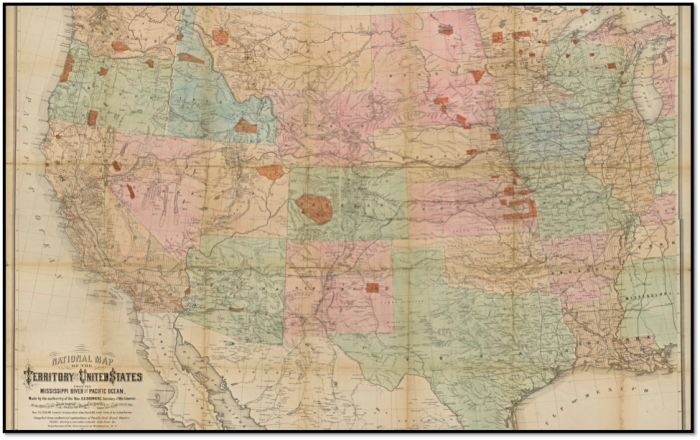 We must necessarily begin with the prevailing cartographic narrative about the Pacific Railway Surveys (fig.1). W. J. Keeler, a civil engineer with the Department of the Interior, constructed this map with the data compiled by the five Pacific Railway survey teams that trudged through the West in the early 1850s. In this cartographic story, the eastern and western extremities of the map are cloaked in a grid, indicating lands surveyed by the federal government. Projected railway lines meander across the West. Red marks denote established Indian reservations, while smaller blots of black, gold, and silver locate deposits of coal, gold, and other mineral deposits.

Like so many maps made in service of empire, truth waltzed with fiction, estimation, and hearsay in Keeler’s cartographic rendering. In his telling of western expansion, Keeler imagined the gridded blankets along the West Coast and Midwest closing in on the center of the region, the tightening noose of rail lines domesticating a landscape and its original inhabitants. Settlement, resource extraction, and an expanding marketplace — this was the modern future Keeler and his comrades envisioned for the United States. Many American people, still reeling from an unspeakably bloody civil war, cast their lot with Keeler, and dreamed of a conquered West bestowing wealth and reunion to the nation.[1] In this rendering, land is a commodity, to be bought and sold, ordered, and surveilled. These lands would also suture the wounds of the Civil War.

Yet Keeler’s map, however emblematic of U.S. colonial designs for the region, belies the confusion, uncertainty, and messy nature of the U.S. settler colonial program in general and the Pacific Railway surveys in particular. It is a map that muffles what Chickasaw scholar Jodi Byrd has called the “colonial cacophony.”[2] In reality, the five surveying parties set out with only rough geographical orientations. They were tasked not only with moving safely through the region — which was no small challenge — but of locating the best possible paths for future railway lines.

Most histories of the surveys tend to emphasize these physical obstacles and then turn to championing the surveying parties for prevailing, thanks in large part to Western science and technologies. Yet the movement of these agents of empire relied on Indigenous cartographic knowledge — knowledge that grew out of their intimate relationship with their homelands. Beyond Keeler’s gridded landscape, Indigenous cartographies prevailed. To get at this lesser-known history we must necessarily employ the term “cartography” capaciously. Here I take cues from the work of critical geographers who stress that Indigenous cartographies are often process-oriented as opposed to product dependent.[3]  Indigenous mapping does not privilege the production of abstractions printed on paper, but more often constitutes a set of conversations, actions, and rituals that orient individuals and communities geographically and/or cosmologically. “Sense of place — or as I prefer to say sensing of place,” ethnographer Keith H. Basso concluded in his acclaimed study of Western Apache place-making, “is a form of cultural activity.”[4] Historians must therefore look beyond abstract depictions on flat surfaces to make sense of Indigenous mapmaking. We must be mindful of oral, written, performative, and experiential modes of mapping.[5]

When it came to their cartographic encounter with the railway surveys, I find that Native peoples selectively shared place-based information with the surveyors through either verbal mapping — the relating of stories of movement through space to position the listener — or what we might call a performative mapping, whereby guides would lead survey parties through the landscape (fig. 2) . This information was not given freely. Over the course of their journeys, the surveyors frequently submitted to Indigenous customs and practices in an effort to gain access to critical geographical information. Diaries of expedition leaders and members are full of requests for guides, and the parties brought gifts in preparation to barter for access to some of this knowledge.

In addition to the cartographic stories shared by Native Americans, the western landscape held Indigenous markers of placemaking. As Whipple, Pope, Stevens, Beckwith, and other surveyors noted, trails, river crossings, half-doused fires, sunken pulleys at watering holes, and stone sketches all served as reminders of Indigenous occupancy. These impressions on the western landscape made for a different kind of map — one that charted indigenous movement, subsistence, and spiritual engagement with their ancestral homelands.

When we take into account Indigenous cartographies we must then return to Keeler’s map mindful that the appropriation of Indian place-based epistemologies was part of the intricate inner-workings of settler colonialism. Yet we must also re-evaluate Keeler’s map attuned to the myriad Indigenous cartographies that the surveyors were not privy to: the maps of cosmologies and sacred spaces, the performative mapping of Indigenous ceremony and custom (fig. 3). These cartographies remain deeply embedded in Native communities and cultures of past and present.

Take, for instance, the map survey leader Amiel Weeks Whipple pieced together from a Chemehuevi leader (fig. 4). Whipple’s map outlines the Mohave Valley, the Colorado River and its tributaries, along with the locations of various Indigenous communities. Yet this verbal map doesn’t etch out important Chemehuevi cosmologies that, say, a Salt Song reveals. Shared during Chemehuevi ceremonies, Salt Songs recount the origin story of the Southern Paiute people while also pointing to critical geographical markers within their ancestral homelands. The songs (there are over 120) tell of the two women who receive special gifts in a cave on Bill Williams River. The women then journey to the birthplace of the Southern Paiute people (the Spring Mountains) and then part, one heading north, the other south. Rich descriptions of the landscapes in these sacred-songs orient the Chemehuevi  geographically in what is today northern Arizona, southern Nevada and Utah, and southeastern California.[6] The songs constitute verbal and spiritual maps that root the Chemehuevi and other Southern Paiutes in place. It positions them in spiritual and physical worlds. It is a story-map of the region that is lesser known, but brimming with meaning.

What, then, can these cartographic visions offer?

Some early thoughts: first, we must account for the fact that the acquisition of places is at the center of the setter colonial program — and of empire more broadly. I’m thinking here of a lesser known but nevertheless revealing line from Richard Henry Pratt, an Indian policy architect and reformer of the 19th century, who stated that the great kindness of the government would be  “to let them [Native Americans] begin without lands.”[7] Western cartography, in its emphasis on boundary making, on commodification, on territoriality, along with its veneer of intellectual and technological superiority, was foundational to the process of Indigenous dispossession. Cartography is central to the legal framework of the settler state. To acquire land was first to know it in a Western sense, to mark it with lines of ownership, to shade it with colors of meaning.

In the same breath, if we recognize the centrality of place and mobility for Native peoples, if we comprehend Indigenous cartographies, we can better grasp the magnitude of dispossession and removal. Dispossession is a history not only of the physical loss of land, but of the dislodging and fracturing of cultural frameworks and cosmologies that defined what it meant to belong to a specific community. Forcibly removing peoples from places threatens their metaphysical senses of community and history and challenges their sacred destinies. As Nick Thompson (Western Apache) wryly conveyed to Keith Basso, “All these places have stories. We shoot each other with them like arrows.”[8] To lose the place is to endanger the stories. And as  writer and Indigenous scholar Thomas King (Cherokee) explains, “the truth about stories is that’s all we are.”[9]

But, I’d also like to suggest that viewing the colonial encounter cartographically is not simply about measuring the devastation of colonization. If we take the work of critical geographers to heart and view Indigenous cartographies as process-based, then we must be attentive to the fact that processes are often more malleable than physical documents. We can observe how indigenous cartographies expanded, evolved, and shifted to maintain and protect cultural identities, to establish and re-establish community in the face of colonization, to adapt to new places, and to turn concentration camps into homelands. Salt Songs are still shared in Chemehuevi ceremonies today, as are other modes of mapping that attach peoples to new places and reinforce their historic connections to distant ones.

This expansive cartographic vision is central to comprehending Indigenous pasts and presents, but might also serve as an important tool for making sense of today’s global movements. Mass migration – of both the voluntary and involuntary varieties – is a response (in part) to a whole host of cartographic narratives about place, nation, the environment, and so on. But these migrations also disrupt existing geographies of power and produce new maps that orient individuals, communities, and societies in space. To get at these re-mappings of place, we must necessarily think beyond the “map” as many of us know it.

2 thoughts on “Beyond the Grid: An Argument for Capacious Cartography”