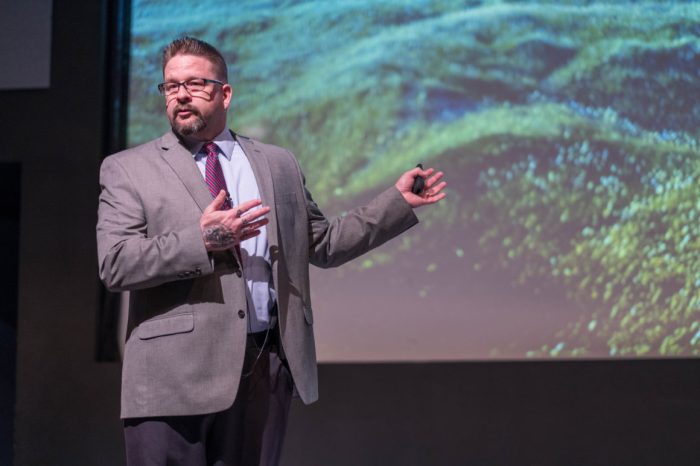 This week, Erstwhile editor Beau Driver interviews historian, blogger, and educator Kevin Gannon. Gannon is Professor of History and Director of the Center for Excellence in Teaching and Learning at Grand View University in Des Moines, Iowa. He teaches and writes on race and politics in US and Latin American history and is a consultant and facilitator for teaching, learning, and diversity workshops on campuses across the United States. In 2015, he received Grand View University’s award for Excellence and Innovation in Teaching. He blogs at TheTattooedProf.com and is a regular contributor to several online journals and platforms, where he writes about pedagogy, history, race, and justice. In 2016, he appeared in the Oscar-nominated documentary 13th.

Erstwhile Blog: Talk a little, if you will, about your current work and the projects in which you are involved.

Kevin Gannon: My current academic post is half-faculty, half-administrative. I teach courses in US and Latin American history, and I direct my university’s teaching center. I love being able to do faculty development work while still remaining in the classroom myself. That’s vital for my practice, I think, and it’s very fulfilling. I’m writing a text for the US Civil War and Reconstruction Eras—a “continental history”—for Routledge, working on a born-digital primary source/“doing history” text for Pearson, and writing a book called Radical Hope: A Teaching Manifesto for the West Virginia University Press’s Teaching and Learning in Higher Ed series. I also serve as coordinator for a cohort of schools in the Council of Independent Colleges’ Consortium for Online Humanities Instruction. I drink A LOT of coffee.

EB: You’re a very active participant in conversations on and about history as they play out in public venues, such as Twitter. How do you think that Twitter, blogging, and online publications contribute to, or alter, the study of history?

KG: I think these venues have been a tremendous asset for our field. Of course, social media can have its downside, Twitter eggs and comment-section trolls, for example. But I think these are spaces where the conversations have become more democratized. Our field has transformed from one where you got your platform by publishing a refereed article or monograph to one where there are many more voices and platforms. You don’t have to be a “big name,” or teach at an “elite” institution to participate in the conversations that are shaping our field and its practice; I find that incredibly exciting and energizing. Like academia as a whole, History needs to diversify. Our field needs more voices of women and people of color, and more avenues for interesting, relevant, and unconventional scholarly work. Social media and blogs, as well as online or open-access publications are ideally-suited to advance these goals, and we ought to be embracing them. There may be some corners where these tools are viewed with disdain, but those corners are not where the future of our profession lies. If we mean what we say about the need for the discipline of History to engage with larger publics, then we ought to be embracing all of these digital spaces to do precisely that. There are plenty of great examples out there—the Junto, for example, or Black Perspectives. Nursing Clio, and the blogs maintained by individual scholars, like Ann Little’s Historiann. For podcasts, Backstory and In the Past Lane are excellent examples of how we can connect our scholarly practice with a larger public. Studying History, and more importantly the ways in which we communicate what we find, is rapidly changing as a result of these tools. I see these changes as a wonderful opportunity to engage students and the larger public with the vital work that we historians do.

EB: The discipline of history has been losing its “market share”—for lack of a better term—in recent years. Fewer and fewer students are taking History on as a major. How do you think that we, as historians, should be working toward promoting a renewed interest in history as a discipline?

KG: I think a big part of the answer to this question lies in what I just talked about above. We have a wide array of new tools and media with which we can disseminate our work. Monographs and scholarly journal articles will never be not important, but there’s a much wider array of ways for us to be engaging our publics, and we ought to be using those tools, using them well, and using them often. Look at the podcast numbers for Backstory, for example—the reach is amazing, and that’s important. We ought to be very cautious about disdaining this type of work as “popular” (the implication being that “popular” and “scholarly” are mutually exclusive concepts).

I also think the key to driving increased enrollment in our majors is to do a better job recruiting students once they’ve arrived on campus. At my university, for example, very few of our majors entered college as History majors. Rather, they declared a major after they’d taken a course with us. So our survey courses are an excellent opportunity in this regard; indeed, for many students, those courses are the only chance we’ll have to intersect with them in the beginning of their college careers. So we ought to be asking ourselves whether we’re paying enough attention to, and putting enough pedagogical resources toward, our survey courses. I suspect many departments might not be able to answer those questions right off the bat, as all too often the surveys are courses many faculty avoid like the plague. But that’s not a very effective way to grow enrollments or connect students (who will be the future “informed public”) to our field. Again, if we mean what we say about how vital it is that History be an integral part of a collegiate education for an informed citizenry, the survey courses are the main chance to put our money where our mouth is.

EB: As the Director of the Center for Excellence in Teaching and Learning (CETL) at Grand View University, you have the occasion to observe and try new and different pedagogical techniques in the classroom, and you have a passion for advancing pedagogy. Talk a bit about the successes and/or failures that you’ve experienced with more radical teaching methods.

KG: I’ll preface this by saying I fail all the time. New ideas rarely work right when I first try them, and what works for one course or area may well not work for another. I know it’s easy for someone in my position, with tenure and security, to tell others to not be afraid to fail, but I still think it’s good advice. I don’t mean fail in the nuke-the-whole-course sense, but to be open to the possibility (probability?) that things won’t go exactly according to plan and receptive to the lessons that experience gives us. I have become a far better teacher by allowing myself to be a critically reflective practitioner, to sit with both successes and failures and learn from them.

My most recent failure was an attempt to have students in an online course build an interactive timeline of the era we were studying. My vision was to have it be like a wiki, where the whole class could make additions and revisions collaboratively. I wanted them to research topics and bring in media from outside sources, to learn about intellectual property, fair use, and citation practices. In theory, it was going to be great. In practice, it bombed. I needed to provide more structure, especially in helping students to determine how much and how often they should be contributing. I also chose poorly when it came to the platform—we tried to use Wikispaces, but it ended up being poorly-suited for what we were trying to do. The interface was clunky, and students got really frustrated with the tools. In the end, it was a failure for both me and the students. I still believe in the assignment, but now I have a lot more understanding of how I need to revise the structure and rethink the platform we use.

Probably the most unconventional pedagogy I’ve used for a course is Team-Based Learning, which worked well in my larger sections but poorly in smaller-enrollment classes. It’s a pedagogy that, paradoxically, needs a larger number of students (and the energy that can bring in a team-based environment) to function effectively, I’ve learned. In many of my courses, I’ve also moved away from the traditional research paper assignment and towards blogging and other digitally-based assignments (like building an online exhibition on a topic, for example). To me, Digital History is one of the most exciting areas of our field, and I find it a powerful way to engage students in doing their own scholarly work. Digital projects meld the “traditional” skills we want our students to build—research and academic writing foremost among them—with skills that will serve them well in a variety of settings: digital design, proficiency with platforms such as WordPress, and navigating the increasing array of online material available to them. These types of projects also emphasize the ways in which historical scholarship can engage broader publics—putting something online is an excellent way for me to have my students think about writing for audience. They’re also more interesting to read and grade, which at the end of a long semester is no small thing!

EB: How did you come to be involved with 13th and can you talk a little about your experience being attached to such a successful and popular project?

KG: Funny story, actually. The short answer is Twitter. I had tweetstormed about an op-ed in the New York Times with which I disagreed vehemently. My threaded rage-tweets led to the editors at The Junto asking if I wanted to write up a guest post for them, as they were planning on posting a response to the original op-ed anyway. I was happy to do so, and they kindly published my piece, which led to some pretty robust discussion in the comment threads. The next day, I got a message from Ava DuVernay’s assistant; Ava had seen the piece (she told me later it had been retweeted all over Black Twitter, which was awesome) and wanted to interview me for a project they were working on that covered some of the same issues. A month later, I was in a studio in the Bronx being interviewed on camera by Ava DuVernay. As she told me about the project, I knew it would be a big deal, not only because of her involvement, but because it was clear that this film was going to connect so many historical dots in urgent and compelling ways.

It’s been an amazing experience to have been part of the film. I got to attend the premiere at the New York Film Festival last September, and meet other people in the film like Khalil Muhammad, Jelani Cobb, and Malkia Cyril, which was incredible for me, as I’m such a huge fan of their work. It was a bit surreal, to be honest; grad school didn’t prepare me for red-carpet events, that’s for sure. But what’s been most powerful for me is all of the students and educators who’ve reached out to me on Twitter, Facebook, my blog, and email after they’d seen the film. I’ve had really powerful conversations, made some great connections, and been powerfully affirmed and heartened by all of the people who are working for justice, in and out of the academy. Mostly, though, what all of this has done is confirmed my sense that history, and how it’s shaped us for good and ill, remains fiercely relevant for so many people. We historians are doing important work; we need to make sure that work has outlets and connects with a broad audience. That’s work all of us can, and should, be doing.

One thought on “Connecting Our Important Work: An Interview with Kevin Gannon”