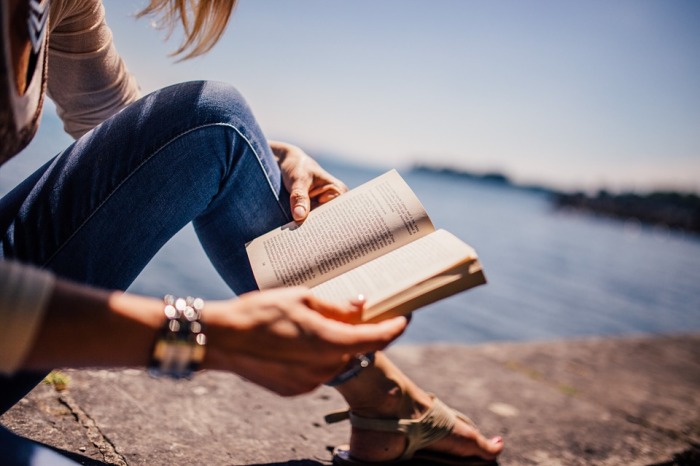 Erstwhile contributor Rebecca Kennedy reflects on the value of reading fiction, with a reading list for the summer days ahead.

Last Friday spring arrived in Vermont. The sun was shining, buds were emerging on the trees, flowering bulbs were making their first appearance, and a cool northerly wind was blowing off of Lake Champlain reminding us that it was still closer to winter in neighboring Canada. I was in the throes of last revisions of my dissertation and by all accounts, I probably should have been frantically studying. Yet for a few hours that afternoon I was lying on a grassy hill overlooking the lake, reading Carol Brunt’s Tell the Wolves I’m Home (2012). A falcon was circling above me, helping me imagine the woods where much of the novel takes place. I knew while lying on my blanket that there were at least a dozen history books that I could have been reading, all of them scholarly works and all directly relevant to the dissertation that I would have to defend in a few weeks. I chose at that moment to make time for fiction, to privilege the more creative side of my brain and ignite the internal storyteller.

With so much academic reading waiting impatiently on our to-do lists, reading fiction can feel like a guilty pleasure: something that graduate students only do on vacation when nothing else is pending. Many of us assume it requires the luxury of lying on a beach, or in a park when the sun is too glorious and inviting to ignore it.

I would like to suggest a radically different approach that moves fiction reading from a superfluous indulgence to a necessity. Reading novels, short stories, plays, and poetry is highly beneficial to historians and scholars of all fields. Many fiction writers conduct historical research that they weave into their stories, presenting us with historical accuracies and facts, and in doing so creatively pulls us into the past. Yet the benefits of reading fiction go far beyond engagement with the past. Crucial to the historian’s craft, reading fiction expands our vocabulary, offers various narrative forms and strategies, and helps us bring historical actors and their context more to life for our reading audience. In short, reading fiction makes us better writers.

This idea was not originally my own. One of my professors mentioned to me several years ago that my writing was dry and too academic. He recommended that I return to fiction as a means of improving my prose. The first book I picked up was J. R. R. Tolkien’s The Hobbit (1954). It was the first novel that I had read in years, and it felt like a homecoming: a sheer pleasure that I could not believe I had ignored for so long. After finishing the book, I turned to the Lord of the Rings trilogy, relishing in the language and syntax that is rarely found in contemporary academic writing. I knew Tolkien’s stories well, and had seen all of the movies, but the exercise of physically reading the pages opened my mind to new narrative tools. Since that moment, I have ensured that I always have a work of fiction on my bedside table. At times I devour a book in a few days; other times I read just five pages a night, slowly working through the book over weeks and even months. Often I make note of the author’s opening, closing, and transitional sentences, as well as word choices. This exercise has been reenergizing, creatively inspiring, and has helped me understand my own craft of writing history in a different light.

Perhaps you never stopped reading fiction. But if you have been living in a fiction drought as I did, I encourage you to pick up a book today. A grassy hill with a view of Lake Champlain is not necessary—a cozy reading ambience can be achieved with a warm cup of tea, a fire or candlelight, an inviting armchair, or even just a quiet moment to yourself. If you are not sure where to start, below is a list of novels that have been especially impactful for some of my colleagues, including a few of the editors of this blog. Some of them remember these books because it introduced them to an historical time period, problem, or question. All recall the simple joys of reading fiction. The stories and writing styles of the books below have long resonated and stayed with them. I encourage you, dear readers, to add to this list in a comment.

Some suggestions, in chronological order by publication date:

Charlotte Brontë, Jane Eyre (1847) – One of the most popular works of English fiction, epic love story of the spirited, witty Jane who endures the difficulties of her past, present, and the English social order.

E.M. Forster, A Passage to India (1924) – Set during the British Raj and the Indian Independence movement of the 1920s.

Arthur Koestler, Darkness at Noon (1940) – Set in 1938 during the Stalinist Great Purge, tells the story of a member of the Old Bolshevik Guard who is arrested and tried by the government he helped create.

Richard Wright, Native Son (1940) – Set in 1930s Chicago, this novel tells the tale of Bigger Thomas while reflecting on conditions of poverty and race relations in the US.

Betty Smith, A Tree Grows in Brooklyn (1943) – The coming-of-age story of an Irish-American girl and her family living in Brooklyn through the trials of poverty.

Isabel Allende, The House of the Spirits (1982) – Set in Chile, a magical realism story of the Trueba family across three generations.

Rendall Kenan, A Visitation of Spirits (1989) – After teenager Horace Cross experiences a tragic profound transformation, his cousin, a reverend, leads community questioning around the values they hold.

Cormac McCarthy, All the Pretty Horses (1992) – First book in the Border Trilogy, which follows the journey to Mexico of John Grady Cole, a Texas rancher. Winner of the National Book Award for Fiction.

Maya Angelou, The Complete Collected Poems of Maya Angelou (1994) – Collection of poetry that touches on love, aging, and travelling among other themes.

Barbara Kingsolver, The Poisonwood Bible (1998) – The story of a Baptist preacher’s family who accompanies him on a mission to the Belgian Congo in 1959 and the decades that follow.

Carlos Ruiz Záfon, The Shadow of the Wind (2001) – Set in Barcelona following the Spanish Civil War, a book dealer’s son is pulled into the mysteries and dark secrets of his city around an author whose work has been systematically destroyed.

Karen Russell, Swamplandia! (2001) – The story of a family of alligator wrestlers living off the southwest coast of Florida.

Sandra Cisneros, Caramelo (2002) – Lala seeks to find her voice and place in her large family, and homes of Mexico City and Chicago.

Ian McEwan, Saturday (2005) – Set in London during the 2003 US invasion of Iraq and ensuing demonstrations.

Ivan Doig, The Whistling Season (2006) – Set in rural Montana, the story centers on a widower, a widow, and her brother.

Ben Lerner, Leaving the Atocha Station (2011) – The protagonist Adam Gordon questions the role and authenticity of art while conducting “research” on a prestigious fellowship in Spain.

Anthony Doer, All the Light We Cannot See (2014) – Historical drama set during World War II in occupied France as a German boy and blind French girl cross paths. Winner of the Pulitzer Prize for Fiction.

Rachel Kushner, The Flamethrowers (2014) – Follows the bold and sentimental journeys of Reno, named for her birthplace, to New York City and Italy.

3 thoughts on “The Value of Reading Fiction”