On the hundred and second anniversary of the Ludlow Massacre, Erstwhile editor Graeme Pente reflects on memory and class at the site, which he visited last month. 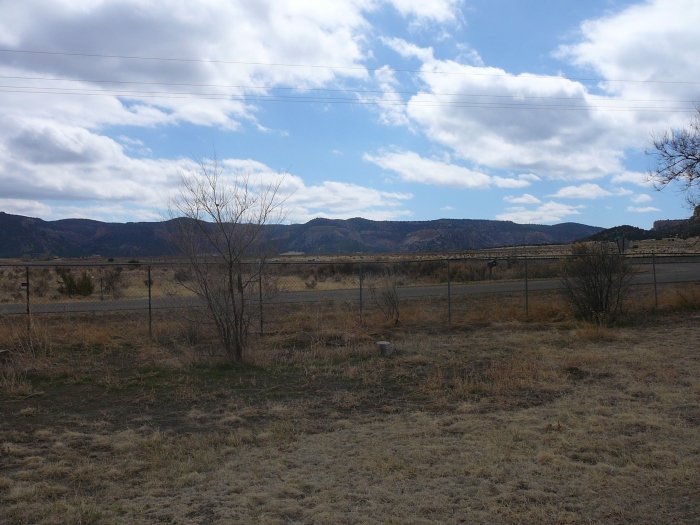 The site’s surroundings; photo by author

The plain stretches to the east—to the west, the hills from which the miners extracted coal. Nestled at one of the canyon mouths stands the monument to the victims of the Ludlow Massacre. Striking coalminers chose the site for their tent colony—after management had expelled them and their families from company housing—because it allowed them to guard access to the coal-rich canyon against strikebreakers, and a nearby railroad cut offered a readymade defensive line. Here, on April 20, 1914, violence broke out between the strikers and the National Guard. The Guard fired a machine gun into the tent colony from their elevated position, killing Frank Snyder, an eleven-year-old boy. Accounts differ as to whether he had ventured out to relieve his bladder, find food, or fetch water, but they are all bound by the empirical fact that he died from a gunshot wound to the head. Most of the strikers and their families escaped late in the day thanks only to the cover provided by a train arriving on the tracks. The leader of the Ludlow group of strikers, Louis Tikas, and two others ended up in the custody of officers of the National Guard. One of the militiamen broke his rifle over Tikas’s head, and his compatriots summarily executed the captives—with Tikas taking three bullets in the back as he writhed on the ground. By the evening, a fire had started in the camp, its origins unknown, though circumstantial evidence points to the Guard. The next day, the returning strikers found the bodies of two women and eleven children in a dugout beneath one of the tents, all of them having asphyxiated from the fire’s smoke. The dugout became known as “the Death Pit.” Their names are inscribed on the monument alongside those of Tikas and four other strikers killed in the course of the day.

The monument and the metal hatch covering the Death Pit; photo by author

It is Spring Break, and I am making my way south to visit the monument to the victims of the Ludlow Massacre as part of a research paper on public memory of the event. But it also serves as a pilgrimage of sorts. I have been struck by the tragic incident since I first learned of it around the time I arrived in Colorado two years ago. I feel a connection to it and the meaning of the sacrifice of these dead workers. But the question of what right I have to feel that connection—what right I have to tell some version of their story—didn’t come until later.

When I came to Colorado on my campus visit, I was working in the front store at a national pharmacy chain in my native Canada. Aside from some summer stints doing physical labor as a landscaper, the retail job was as close as I personally came to being a working man. My work in the service industry was of a different sort from productive labor in general and a far cry from the dangerous labor of the miners. But I was equally a cog in a machine that made someone else money, even if my job was merely as a middleman bringing finished goods to customers rather than producing them: the machine had simply become more specialized in the last hundred years. The business model of the pharmacy chain placed each individual pharmacy in the hands of a pharmacist/owner, so I shared workspace with my boss and I felt exploited by him on account of my meager pay and my hours often coming close but never quite making me a full-time employee, which would have given me the right to a benefit plan.

Originally erected by the United Mine Workers of America (UMWA) in 1918, the monument stands “in memory of the men, women, and children who gave their lives in freedom’s cause at Ludlow, Colorado, April 20, 1914.” The notion of sacrifice in the name of freedom seems today an epigraph more fitting for a military monument to war dead. Of course, the UMWA and many others see the efforts of organized workers as waging war for working people in the name of freedom within American society. 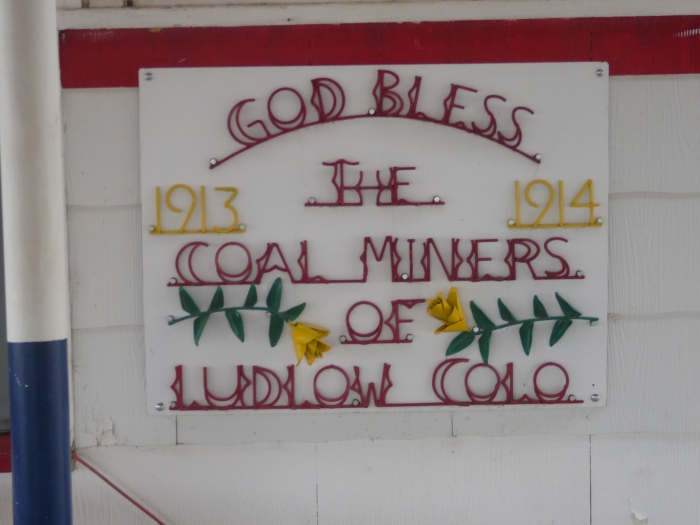 Another memorial in the site’s pavilion; photo by author

And suddenly it is a very problematic question. Academics are often very careful, very self-aware, when trying to tell the history of an ethnic group not their own. But this awareness does not so readily come to mind in the question of class. Both of my parents received college degrees and became teachers. I was aware of growing up in comfort. I am aware now that my childhood was very comfortable. What claim do I have to tell this story?

The monument sits a short distance off of Interstate-25 in a barren stretch between Pueblo and Trinidad in southern Colorado, a region economically depressed by the closing of the coalfields in the late twentieth century. The isolation and the disappearance of the mining towns give the monument’s placement a feeling of randomness. Without the brown “National Historic Landmark” signage on the highway, one would easily pass it by without a glance. As one draws closer to the hills, the monument and its immediate surroundings become clear. Crossing signs mark the still-active railroad cut on the western boundary of the old tent colony. The monument stands next to a pavilion with some picnic tables for those who wish to sit and contemplate the site and the meaning of the deaths that happened there. The area gets widest use during the annual commemoration of the event, which takes place in late June in hopes of fine weather.

It was June when my grandfather died. I wasn’t yet four years old. He was a union man who worked for the hydroelectric company in the city where my father grew up. I can remember seeing a certificate recognizing his forty years of work for the company on the wall at my grandmother’s house when she would babysit me. Forty years. It seemed an age. And somehow I connected that length of time to the brain tumor that killed him, and I conflated it with the cause. I remember thinking that the cancer had surely developed because he had been up in buckets and cranes fixing power lines, his head so close to whatever beams they were emitting. And for forty years! To me, his death took on the nature of a great personal sacrifice for the comfort of his family—not only his son, but his son’s son, too.

Detail of the statuary; photo by author

In front of the obelisk bearing the memoriam are the stone figures of a miner and a woman holding a child. The man stands straight—simply, stoically—with his arms at his sides and one hand on his belt. His sleeves are rolled up to reveal strong forearms—he is ready to work—and his shirt halfway unbuttoned to reveal a broad, strong chest and perhaps to cool him from his work. His countenance is one of grim defiance. His set jaw contorts his mouth into something between a sneer and a grimace. Yet there is also a note of defeat, his head tilted slightly downward and his eyes nearly closed. Is it defiance or resignation then? The woman leans, half-sitting, against the base of the monument with her cheek resting on her fist, clutching a baby with the other arm. She sits slightly behind the man, placing her in a subordinate position, her posture itself less powerful than his, and even though she is higher on the monument, that advantage only makes her as tall as the man. She sports a long, flowing dress and sandals. There is something Classical about her appearance; perhaps these notes allude to the Greek origins of many of the strikers, including the murdered Tikas. Between her garb and the child, the woman’s role is clear: one of domestic care and childrearing rather than the physical labor of resource extraction. Slumped against the monument, her demeanor reflects more the defeat implicit in the man’s resignation than any defiance. Her look is also downcast, and her eyes are closed. Dressed in ill-fitting clothes reminiscent of the mother’s—further infantilizing the woman—the baby rests his or her head against the mother’s breast, one hand clinging to her arm. The child’s eyes and mouth are open in a look of stupefaction bordering on horror. The expressions depicted on the statues become clearer when one considers the figures’ position. First reading the man’s look as defiance, I wondered what he was doing facing West rather than East—gazing back at Rockefeller and the other New York capitalists who had made conditions in the mining camps unbearable enough to force a walkout. Was he facing West as an embodiment of the nation, ‘the hands that built America?’ Or was he facing the coalfields, the site where his labor begot his livelihood, from which the company had shut him out? Or was he facing down his would-be killers, the gunmen of the National Guard? This last position came closest to the truth.

Whatever the sacrifices (real or imagined) my grandfather made, his are but one set among many: vertically—from one generation to the next—and horizontally—from one fellow worker to another. What matters more than scholars’ tenuous connections to a working-class past, maybe separated by a generation, is their capacity for empathy, their capacity to tell a story of (perhaps ultimate) sacrifice in order to recognize it, to uplift or inspire others, and to honor those passed. 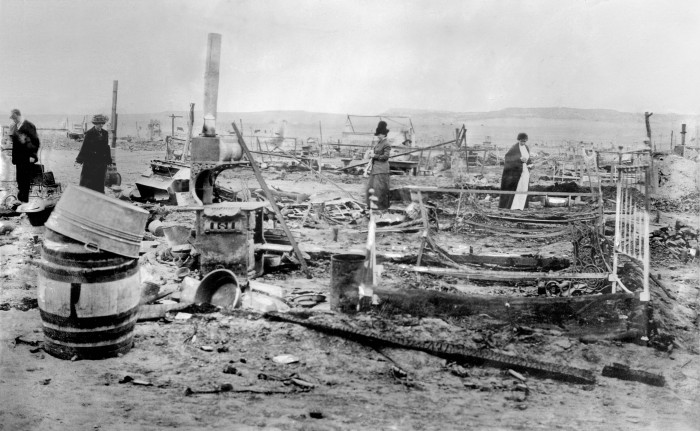 Strikers and their families pick through the ruins of the tent colony, 1914;  photo courtesy of Library of Congress

In the end, I realized the key was not in what the statue of the worker was looking out at, but what he was looking down at. The metal covering on the ground in front of the monument indicates the location of the Death Pit. The figures are meant then to portray the moment of the strikers’ return and the discovery of the dead beneath the tent remains. One imagines then the three people of the statues amid the ruins of the tent colony. The woman has collapsed perhaps, on account of the horror and grief the Death Pit inspires. The man’s face contorts in anger and disgust. The babe tries to make sense of the scene. In this way, the three figures offer clues to how the visitor should experience the site, as well. They freeze the horror of the moment of discovery in time, reminding the visitor of the magnitude of the loss in this place, the unnecessary nature of the deaths and destruction, and the sacredness of the ground.

Can I do them justice?