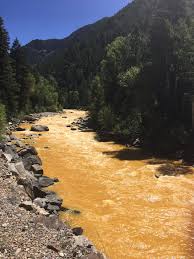 No, the Animas River is not supposed to look like Tang.

Erstwhile‘s Sara Porterfield looks at the legacy of mining in southwest Colorado that led to the most recent pollution of waterways in the region.

There is a phrase in the water quality world that goes “keep it clean, ‘cause we’re all downstream.” Water quality agencies from the local to the national, from the water utility in Boulder, Colorado (Erstwhile’s hometown) to the Environmental Protection Agency (EPA) have endorsed this phrase as a tagline for a shared public education campaign. You may have seen this phrase spray painted on a storm drain or posted on a sign near an urban creek in your neighborhood as a warning not to dump harmful household waste products into your community’s waterways. It also serves as a reminder that our waterways connect us all: what happens upstream affects everyone and everything—animals, plants, and people alike—downstream.

Consequences for those downstream exist not just at the local community (or creek) level, but also at a regional level. Last month, EPA employees who were working on the clean-up of the abandoned Gold King mine outside the town of Silverton in southwest Colorado accidentally unleashed three million gallons of mining wastewater and toxic sludge into nearby Cement Creek. Cement Creek flows into the Animas River, which flows into the San Juan River, which joins the Colorado River in Lake Powell in southeastern Utah. The spill affected all of these waterways and the people who depend on them.

One accident in one small creek caused the EPA to deem portions of the Animas and the San Juan rivers—on which communities in three states rely for irrigation, drinking water, recreation, and a whole host of other activities that contribute to local economies—unsafe for drinking, irrigation, or recreation. The Animas River, which flows through the middle of Durango, powers the town’s summer tourist economy through the rafting industry and influences residents’ leisure time. Following the spill, Durango residents watched as the river turned a bright, unnatural orange color, reminiscent of the powered drink Tang. Residents of the Navajo nation who depend on the San Juan River were banned by the EPA from using the contaminated water, despite lack of an alternate source of irrigation for their crops. Many of these crops died, leaving many members of the Navajo nation angry (once again) with the federal government’s failure to come to the aid of those who live on the reservation.

Mining in the San Juan mountains of southwest Colorado, home of the Gold King mine, had its heyday from the 1870s to the 1930s [link]. The Gold King itself was abandoned in 1923, though mining continued in the region until the early 1990s when clean-up began. The Gold King accident is not the first spill to wreak havoc on the Animas and the communities of the watershed; mining slowed in the 1930s because downstream farmers complained of the toxicity of the water used for irrigation while in 1975 a tailings pile breach caused the Animas to look like “aluminum paint” for a hundred miles.

Southwest Colorado’s mining history, often the reason tourists travel to Silverton, Durango, and the surrounding communities, leaves a toxic present with which downstream communities must contend. When viewed from this angle, “we’re all downstream” is equally true for water quality as it is for history.