Recently, Timothy Snyder published a short book called On Tyranny. Snyder is an historian of the Holocaust at Yale and the author of other books including Bloodlands (2010) and Black Earth (2015), both of which examine the abattoir of Eastern Europe during World War II. His concluding point in On Tyranny is “Be as courageous as you can. If none of us is prepared to die for freedom, then all of us will die under tyranny.” I’m writing today to talk about courage, bravery, and democracy. I want to take the opportunity to address the recent incident in Washington D.C. where young men from a private Catholic school surrounded and made racist chants toward Nathan Phillips, a Native American Elder, activist, and U.S.M.C. veteran. In our age of networked lenses and digital video, there are innumerable views, perspectives, and arguments over what actually happened. Joining the analytical melee on cable news and Twitter dissecting the video serves no purpose. I must acknowledge my own privilege first: know that I am speaking as a middle-class white male with a Ph.D.; I am also a combat veteran, with service with the 4th Infantry Division in Iraq as a medic. It is from this position I write; I would offer the following interviews with Phillips and an evolving collection of other Indigenous perspectives on the issue above my own: Phillips on Democracy Now!(start at 15:30); perspectives by Kaitlin Curtice and Vincent Schilling; an evolving collection of Native voices on the incident; and the following Native Twitter accounts: @dallasgoldtooth, @mredshirtshaw, @VinceSchilling, @nick_w_estes, and @NativeApprops.

According to an interview with Phillips, he witnessed the young men in the Make America Great Again hats being taunted by a religious minority known as the Black Hebrew Israelites. The young men had been attending the March for Life, an annual anti-abortion demonstration when the Black Hebrew Israelites began taunting them. The young men escalated the situation, and Phillips, along with other Native Americans in D.C. for the Indigenous People’s March, moved between the groups. Phillips says “I was there and I was witnessing all of this … As this kept on going on and escalating, it just got to a point where you do something or you walk away, you know? You see something that is wrong and you’re faced with that choice of right or wrong.” As Phillips moved between the groups, he played his ceremonial drum and sang a prayer song, but soon realized he had moved between the “Beast” and its “prey,” the religious minority with Black skin. This man knows what danger and conflict looks and feels like, in the immanent way of many veterans. Phillips states that he then “put myself in between that, between a rock and hard place,” between the two groups, leading to the infamous viral photos and videos. 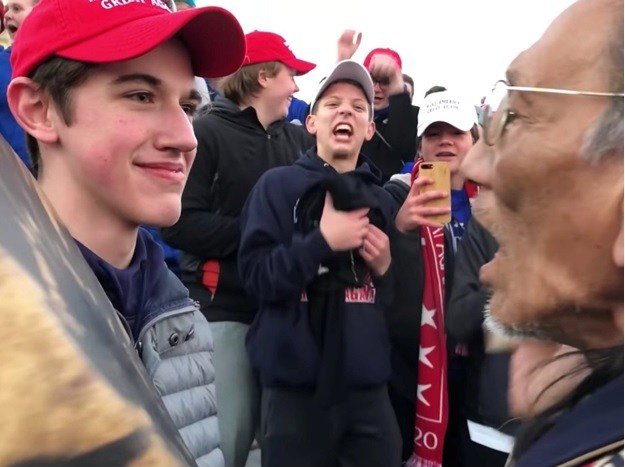 The First Amendment of the United States Constitution states: “Congress shall make no law respecting an establishment of religion, or prohibiting the free exercise thereof; or abridging the freedom of speech, or of the press; or the right of the people peaceably to assemble, and to petition the Government for a redress of grievances.” Free speech and the free expression of religion are constitutionally protected from government interference and intervention. Both the young men of Covington High and the Black Hebrew Israelites were practicing the free expression of their religious beliefs and their right to free speech near the Lincoln Memorial. Their views came into contention, and instead of respecting each other’s rights, the young men of Covington Catholic became a mob. Mob mentality is dangerous: to bystanders, to opposing sides, and to civility in general. These young men shifted gears from one flavor of racist chanting to another as their target changed to Phillips, making “Tomahawk Chops” and chanting “Build the Wall” at a Native American, whose ancestors lived in North America for millennia before the United States became a thing.

I want to talk about bravery, courage, and democracy. No right previously denied has been won through timidity. Every right won, whether religious freedom, the right to unionize, freedom of expression, or otherwise is built on courage and bravery. Throughout American history, people have protested, organized, fought, and died to secure their rights, whether those rights were articulated in the Bill of Rights or in the Universal Declaration of Human Rights or just in a glimmer of hope, trapped in a dream. It took bravery to end slavery, to fight Jim Crow Apartheid, to fight fascism in World War II, to fight for the rights of Native Americans to exist in their ancestral lands, to fight for the right of women to vote. Courage and bravery are not restricted to armed conflict—it takes courage to stand for what is right, for what matters, and most importantly, for the rights of people with whom you disagree. It takes courage to disagree with someone in a civil manner. It takes bravery to witness nascent violence and move to stop it, especially when it could mean bodily harm. It takes bravery to exercise one’s rights, and to exist as a human being when others deny your humanity. Our democracy depends on the bravery and courage of its people, the source of its power.

We live in a polarized country. We must appreciate its history—especially the difficult parts which offer perspective in an incident such as this. We must reconcile with the crimes of our national past, especially the genocidal policy of settler-colonialism which dispossessed the Native peoples of North America, and the horrific exploitation of chattel slavery which expropriated African Americans of their labor, bodies, and families for profit. We need to acknowledge the resulting systems of oppression as well: the reservation, Jim Crow, and the prison system. We must remember the wars we’d rather forget, the lies told to commit the nation to war, the dead and wounded on both sides, the psychological consequences on its survivors, and the costs to our democracy. In these trying times, it is critical to demonstrate empathy when considering the past and the present. Empathy takes courage and a certain strength. It took a lot for me to learn to practice empathy, yet I can recognize that Mr. Phillips possesses empathy in droves.

Mr. Phillips is a courageous man. He stopped racially-motivated violence, armed only with prayer songs and a ceremonial drum. For a brief moment near the Lincoln Memorial, dedicated to the emancipation of African Americans, the fate of the Republic rested on Mr. Phillips, a Native American and a veteran of the United States Marine Corps. Be brave. Be courageous.

Jeff Bartos is an American historian and lives in Helena, Montana.