In the first of two posts on the Japanese-internment facility, Camp Amache, Erstwhile editor, Beau Driver, discusses the early history of Japanese internment and how this led to the establishment of Camp Amache, near Granada, Colorado. His second post, on the memorialization of the camp will follow in Spring 2019.

When I took my first U.S. history course as an undergraduate at the University of Colorado, Colorado Springs, I was surprised when we got to the lecture that included Franklin Roosevelt’s Executive Order 9066. At some level, I must have been aware of the internment of Japanese-American citizens, being that it happened in my backyard. But perhaps I had missed that discussion in high school. I remember thinking, “How could this have happened to people who were born here?!” Yet, happen it did. I would be even more surprised later when I learned that one of the ten relocation centers existed in my home state of Colorado.

The arid Eastern Plains of Colorado can be almost inhospitable. Summers see severe thunderstorms, tornados, and even dust storms, while the winters can be bitterly cold with heavy snowfall. In this environment, the state of Colorado and the United States government established one of these concentration camps for Japanese Americans in 1942. The Granada War Relocation Center, later known as “Camp Amache,” sits on the far eastern edge of Colorado about a mile from the town of Granada. At its peak in October-November of 1942, Camp Amache held more than 7,300 detainees and over the course of its existence, more than 10,000 people passed through the gates.

Currently, the news continues to be filled with stories of the supposed dangers of immigrants—whether they be from the Middle East or Central America—and “caravans” and the heartbreaking stories of families whose children have been taken and detained in facilities in the U.S. This fervor has reached epic proportions at times. It has also damaged people’s lives in ways that may never heal. With the current debate over immigration raging in the United States, it seems apropos to examine the internment of Japanese Americans during the Second World War.

I will present this story in two parts, this one and one to be published in the near future. The first of the two will give the background and history of Camp Amache. The second will be an examination of the site now and the efforts to create a lasting memorial to this profound violation of Americans’ constitutional rights.

One thing needs to be mentioned at the outset. While the ongoing human rights crisis that we experience as asylum-seekers are rebuffed and children are taken from their parents is horrendous, it is different in one major way: these people are not citizens of the United States. Between 1942 and 1945, 125,000 persons of Japanese descent were imprisoned in the United States, and roughly two-thirds of them were U.S. citizens.[1]

Just after the bombing of Pearl Harbor on that “day of infamy,” December 7th, 1941, authorities throughout the West Coast began to round up and detain Japanese immigrants and their children because of the supposed threat of “fifth column” activities: sabotage and clandestine intelligence gathering. Initially, the FBI, under the direction of J. Edgar Hoover, focused on jailing “Issei”—Japanese immigrants to North America. In many cases, these immigrants were not eligible for American citizenship when they came to the U.S., as the Immigration Act of 1924 specifically excluded the Japanese from naturalization. Exclusionary immigration acts in 1790 and 1870, in concert with landmark Supreme Court decisions—such as In re Ah Yup in 1878—and the Chinese Exclusion Act in 1882, ensured that no one from the “Asiatic Barred Zone” became a citizen of the United States. The specter of the “Yellow Peril” that had haunted the American West since the mid-1800s reappeared in 1941.

Shortly after the government targeted the Issei, their children—Nissei, or second-generation Japanese Americans—also came under more scrutiny. As 1941 became 1942, Japanese Americans found themselves required to relinquish firearms, camera equipment, and short-wave radio sets and transmitters.[2] These measures were intended to limit the ability of “enemy agents” to communicate and send intelligence to the Japanese government. However, contemporary investigation—in the form of the “Ringle Report”—uncovered no instances of any spying done by Japanese Americans or their parents. Further, while ethnic Germans and Italians had also come under scrutiny as early as 1939, neither of these other groups were subjected to mass, forced forfeiture of their personal property or being shipped to concentration camps in the interior of the country by the tens of thousands. There can be no mistake: the motivation behind Japanese internment was racial and it was built on decades of animosity and mistrust of the Chinese and Japanese who made their homes on the West Coast.

President Roosevelt officially signed Executive Order 9066 on February 19, 1942. This authorized the military to arrest, relocate, and detain more than 100,000 Japanese immigrants and Japanese-American citizens. On March 18, 1942, the president signed Executive Order 9102. This second, lesser-known order established the War Relocation Authority (WRA), the organization tasked with creating the concentration camps that housed the detainees. Over eight months, the WRA built and opened ten separate camps, including Camp Amache, which opened in August 1942.

When the government began to take Issei into custody, it also offered many the option to “voluntarily” relocate to the interior of the country. After a fair amount of deliberation, the Japanese-American Citizens League (JACL) suggested that their members take advantage of this opportunity and relocate. The JACL was in a nearly impossible position. As a group that advocated for the civil rights of Japanese Americans, it’s raison d’être was to protect its members from just these types of infringements. However, to come out against the government meant being labeled “unpatriotic.” The JACL, somewhat reluctantly, announced that its members should prove their loyalty and patriotism by removing themselves to the interior, if possible.

Prior to compulsory removal, a few Japanese families found sponsors in Colorado and moved into the state. Colorado’s Ralph L. Carr was the only governor of any of the interior states to be sympathetic to the position of these citizens and welcomed them. Because of this, Colorado became the best option for many Japanese Americans. Also because of his support for Japanese internees, Carr was defeated in his bid for reelection in November of 1942. Yet, this did not mean that all Coloradans welcomed them with open arms. Protests against this influx of non-whites sprang up throughout the state. Many Japanese found themselves in a new place with the same racist ideas. 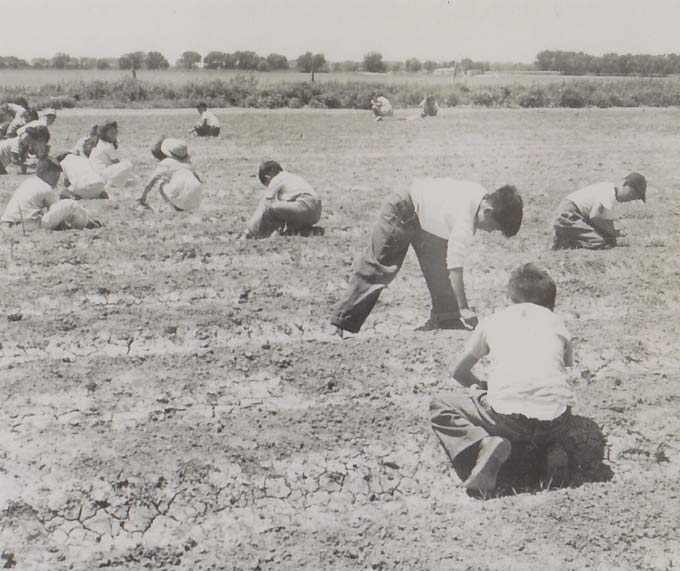 By many accounts, life at Camp Amache was better than at many of the other camps. The camp had its own fire department and police force—which was made up of Japanese-American detainees and called Internal Security (IS) by the WRA. Most of the internees cultivated vegetables for the camp’s use. Some even found jobs in the town of Granada and were allowed to leave the camp for periods to work. The town itself tended to welcome their countrymen and countrywomen, for the most part. Overt displays of racism seem to be fairly uncommon in the history of Camp Amache.

The actions of the government were not truly magnanimous. The use of the imprisoned as a security force was not meant to ease the tensions between the government and the inhabitants as much as it was a way to limit the number of Military Police required at the camp. The cultivation of the land for food was not to give the people of the camp meaningful work as it was meant to create food for them to add to the $0.45 allotted for each person, per day, for food, water, and general living necessities. Camp Amache was so productive that it even provided food for other internment camps and the war effort generally. Further, the prisoners who worked in WRA-sponsored jobs on the camp made around $16 per month, while their Caucasian counterparts made close to $135 monthly. The U.S. government found every possible way to reduce the cost of housing these citizens, while also ensuring that they shouldered the burden of their own upkeep as much as possible (not unlike the state of U.S. prisons today, generally).[3]

Even so, life behind the barbed wire proceeded. Children were born, families grew and shrank, parents got up in the mornings and went to work, school-age children were educated on the grounds of the camp.[4] All of this in the shadow of eight guard towers, equipped with machine guns. To point at the relative comfort of Camp Amache is to attempt to obfuscate the fact that the citizens were taken from their homes, brought to an unfamiliar location, and subjected to the daily humilities associated with their own imprisonment. Most of these Japanese Americans bore the indignity of it all with a serious and stoic resolve. They knew that they were loyal to the United States and they often felt that this was just a way for them to prove it to those around them. Even so, it would be incredibly difficult to place a qualitative or quantitative cost on the imprisonment of these resilient and patriotic families.

It is very important in today’s political environment to look back and to remember the indignities that these Americans suffered and how their own government betrayed and then imprisoned them. When we think of immigrants at the border who are being illegally tear-gassed and kept from entering the country and requesting asylum, we should remember all of our very own who suffered because of racial prejudices and the fear of the unknown “other.” Before we turn to a friend and say something like, “They really just need to come into the country legally”—a statement that, on its face, implies that legality equals morality while simultaneously glossing over the intentional efforts to keep people from entering the country by legal means—we should stop to remember all of the American citizens who were wrongly imprisoned by their own government.

[1] This is in no way meant to imply that “citizens” hold a level of human rights that is not or should not be afforded to non-citizens—say, asylum-seekers. The distinction is simply meant to highlight the fact that democratic societies often place a special importance on the status of a person as a natural-born citizen. The case of Japanese-American internment is one that should worry those who fear that the government is likely to abuse its power by infringing on the rights of its citizens.

[4] Harvey, 103-108. The schools on Camp Amache were subject to the same accreditation process as other public schools. While fairly primitive in construction and appointment, the schools, by all accounts, were effective and the students “attentive and industrious.” In a stunning display of hypocrisy, primary and secondary school children were taught history and civics, respectively.