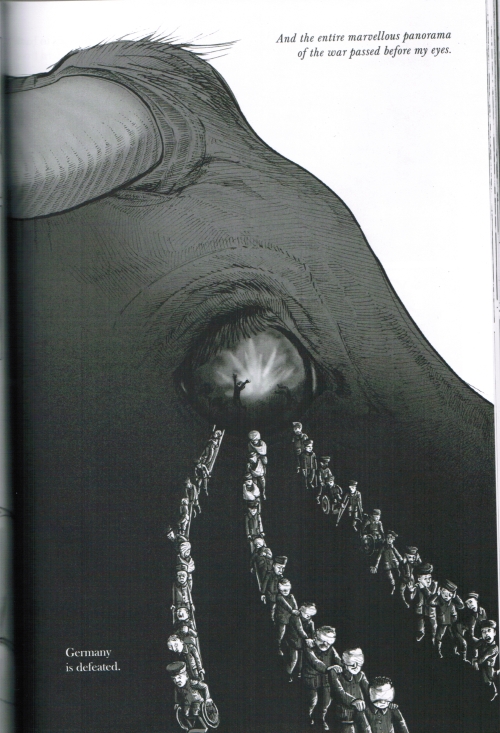 Rosa, empathizing with a beaten water buffalo hauling materiel, sees “the entire marvellous panorama of the war” pass before her eyes, p. 141.

Rosa Luxemburg, the German socialist revolutionary born in Poland, has had a tortured legacy, as historian Paul Buhle points out in the afterword to Red Rosa. Buhle, editor to Evans’s account of Luxemburg’s life and author of the New Left classic Marxism in the United States (1987), sketches the changing uses of Luxemburg’s writing and memory. He notes how the official Soviet denouncement of her thinking under Stalin made her a champion for both exiled Trotskyists and European democratic capitalists before she was revived in the 1960s as a forerunner of modern feminism. But her usefulness has long been as a symbol, a distilled version of herself, rather than as an economic or social thinker in her own right. In the last twenty years, this trend has begun to change, particularly with efforts to publish her complete works and letters in the last five years. These publications imply that Luxemburg’s thought has critical applications for the present.

Indeed, Evans’s account of Luxemburg’s life (shortlisted for the 2016 Bread and Roses Award for Radical Publishing) is rooted firmly in the present. Evans even interjects at one point, drawing herself within the story, to show how Luxemburg’s economic thinking can still be applied to our present relations of production and consumption by simply updating a few terms. At another point, Evans explicitly points out the connections between Luxemburg’s economic calculations and the 2008 financial crash. And the closing panels make clear that in our present moment of crisis, Luxemburg is indispensable.

Artistically, the work is uneven. Evans’s background as a cartoonist lends the art a characteristic that can border on the juvenile, making it sometimes feel jarringly out of step with its subject matter. But Evans is undeniably creative in her depiction, which is especially essential (and impressive) for a life so centered on ideas as Luxemburg’s was. In fact, as though it were growing alongside Luxemburg as she develops into a full-fledged socialist revolutionary, the artwork becomes increasingly stark, stunning, and beautiful over the course of the 180 pages of story. There are more striking images in the second half of the book than in the first, and Evans does an admirable job of varying the panels throughout. A few choice smatterings of color for these more impressive images would have enhanced their effectiveness—in the way, for instance, that Ari Kelman and Jonathan Fetter-Vorm did for Battle Lines (2015). Bound though she is by the black and white format, Evans produces a captivating graphic novel overall.

As a work of history, Red Rosa is quite successful. Evans provides a full picture of Luxemburg’s life. She shows not only Luxemburg’s development as a thinker but also her personal relationships—friendships, various lovers—so that the reader finishes the book with a sense of a whole, flawed human being, rather than yet another “Luxemburg-as-symbol.” One aspect of Luxemburg’s life that stands out, for instance, is her blind spot for employing domestic labor despite her clear commitment to the broader uplift of the working classes. As we might expect of a life so centered on ideas, Luxemburg herself apparently experienced these relationships in the abstract. As Evans points out in a note, “it seems that nineteenth-century socialist intellectuals’ sympathies with the trials of the working classes didn’t extend to their personal lives. When Rosa Luxemburg writes about the proletariat, it is always as ‘them’, never as ‘us’” (187). As the note suggests, Evans thoroughly researched Luxemburg’s life, drawing on actual photographs and incorporating Luxemburg’s own words from her private letters in the text. At times, Evans’s additions to the text, particularly her narration, can be too colloquial. But one does get the sense that these rhetorical flourishes add some levity to a life that was not endlessly focused and grave.  Rather, Luxemburg enjoyed escaping to the beauty of nature and had a playful side, herself. Ultimately, the story is most effective when Evans uses Luxemburg’s own words and brings them to life with the creativity of her images.

An example of Evans using Rosa’s own words…

Evans makes some minor changes to the chronological order of events for dramatic effect and combines a couple of Luxemburg’s acquaintances in the interest of concision. An author’s note at the beginning of the text warns the reader of these changes. Overall, they do not adversely affect the narrative. Evans follows the main story with an additional thirty pages of notes, clarifying where these changes are and including the full text and sources of Luxemburg’s words that she incorporated. The ideological, tactical, and personal disagreements between Luxemburg and the leadership of the German Socialist Party (SPD) are well-documented in the text, as are the particular challenges she faced as a woman entering the early twentieth-century world of political economy. More thorough treatment of her relationship with Soviet leaders Lenin and Trotsky—which is only briefly touched upon—would have been rewarding, as Luxemburg never shied away from a confrontation.

In terms of incorporating this work into a classroom setting, the drawing style and the clear, simple explanations of Marxist economics at first would suggest use in a senior high school class. However, some of the content, particularly nudity and sex, bar that option. At the college level, Red Rosa could serve as a different way of looking at politics, dissidence, and economic thinking in the late nineteenth and early twentieth centuries for students of a survey-level European history course. It could also make for productive discussion in a historical methods course at either the undergraduate or graduate level for the questions it raises about chronology, authenticity, and popular history.

Regardless of its use in the classroom, Evans’s account is a welcome and accessible introduction to the life and thought of an incredible woman, providing a portrait that goes beyond the symbol.