Peter H. Wood earned his Ph.D. at Harvard and taught early American history at Duke for more than three decades. In 2011, he won the Asher Distinguished Teaching Award of the American Historical Association. Now semi-retired, he lives in Colorado. Last fall Wood taught a graduate seminar on slavery at CU Boulder, and next April he will deliver the Annual E. P. Thompson Memorial Lecture at Pitt. Besides writing several widely used books on early American slavery (Black Majority and Strange New Land), he is the co-author of an important U.S. History survey text, Created Equal, now approaching its fifth edition. Wood’s door is always open, so Erstwhile dropped in on him recently to chat about the mysterious art of writing a textbook. 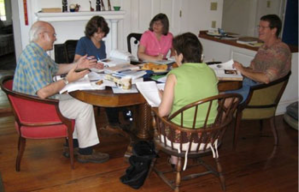 EB: Fall semester always prompts renewed ambivalence about survey texts and questions about how they come to be. Did you always know you wanted to take part in writing a college U.S. History survey?

PHW: Not a bit, but now I wish I had tried it much sooner; tackling an overview is a real learning experience. I shared the common resentment against general texts, and I avoided them when I first started teaching in the mid-70s. Besides, my father had co-written a microbiology text, and I knew what a toll it had taken. Still, when the challenge came, I jumped at it.

After all, by the 1990s, the shared narrative about the American past was crumbling of its own weight and inadequacy, and textbooks at every level were failing to keep pace. Writing Black Majority in graduate school (about slavery in early South Carolina) had given me a heightened sense of how we Americans often censor and repress our own past. It seemed time to pitch in.

EB: How do new textbook ventures hatch, anyway? Do you write up a proposal and send it out to publishers, the way you might pitch an idea for a scholarly monograph?

PHW: I’m sure that can happen, but for us it was the other way around. In 1998, an editor at Addison-Wesley-Longman taped a focus group with young professors talking about what they wanted in a textbook and couldn’t find. She shared the video as something of a dare, and before long I was part of a first-rate team.

EB: But why not write it yourself, along the pattern of George Tindall, Howard Zinn, or Eric Foner?

PHW: Frankly, I don’t know enough. There’s a lot to be said for a single voice, but it is a huge undertaking. A team combines more perspectives and differing strengths. Ideally, you divide up chores and learn from each other. Luckily, we’re even better friends now than when we started.

EB: What about drawbacks? One old chestnut is that textbook authors make a bargain with the devil; they take on a sure way to make the money but give up the prospect of writing anything original.

PHW: I guess I disagree on both counts. Lots of textbook projects crash and burn, so there is always risk involved. Granted, the ones that succeed and go through several editions certainly turn a profit. Still, remember that the authors have no role in marketing. We’d have loved to reach more students with a lower-priced book, whatever that did to our royalties. For me, money was never the motivator—maybe because I don’t have kids.

As for creativity, that’s an interesting problem. You’re doing lots of sifting and synthesizing, no doubt about it. But you are always looking for ways to surprise your readers and keep them engaged. One key for me writing the early portions of Created Equal was to get away from the old East-to-West history, where the trans-Mississippi West only made an appearance with Jefferson’s Louisiana Purchase. Living in Colorado confirms my belief that American history should be geographically broad from the start.

EB: So, some new wine in those old colonial bottles. But still, aren’t you and your teammates confined to a standard progression that publishers and teachers expect, even demand?

PHW: It’s not as rigid as you think, since U.S. History, like every other history, is always being debated, changed, expanded. Sure, editors and teachers are often fearful of wild experiments. But on the other hand, most publishers are eager for a distinctive new text in a crowded market, and most professors are glad to test out textbooks that incorporate changes in their field. If there was any straight-jacket, we imposed it on ourselves. At the time we dove in fifteen years ago, we felt many texts had become too thematic, without attention to flow over time and the interrelation of contemporary events, so we tried to help students and teachers by using a more chronological framework.

EB: “Chronological” versus “Thematic” must be debate that comes with the territory, and never quite gets resolved. Can you give other examples of ways your team pushed the envelope a bit?

PHW: Sure, here are several. Strange as it seems, having more women than men on the collaboration was a change from past norms, and it has been a real advantage in sharpening our social history emphasis. Also, we were lucky to recruit Professor Vicki Ruiz to the team. As you know, she had been a pioneer in Latino and Latina history, and she has done a wonderful job at making the rest of us more competent and inclusive regarding that expanding part of the American story.

Let me add an example from my own work too. In laying out the first eight chapters, running up to 1790, I made sure that one was devoted exclusively to the complex beginnings of racial slavery, what many scholars now call “The Terrible Transformation.” That was a first for a U.S. History text, so far as I know. Traditionally, enslavement received little acknowledgement before the Antebellum Era, certainly not a whole chapter. But what was once a hidden—almost non-existent—aspect of early American history now has a wide research base and an obvious importance. I’m pleased some other textbooks have now decided to follow this approach. Maybe that’s an illustration of breaking the mold and making a contribution. I hope so.