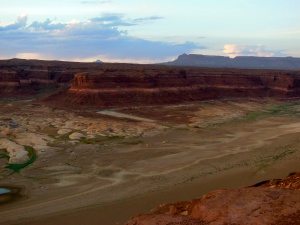 Hite Marina on Utah’s Lake Powell, summer 2013. Lake Powell currently holds 45% of its capacity, and Hite, at the northern end of the lake, is unusable as a marina.

This past Wednesday California Governor Jerry Brown announced the state’s first-ever mandatory water restrictions in response to the severe drought gripping the state. While snowpack throughout the American West is at a record low, snowpack in the Sierra Nevada mountain range, which supplies one-third of California’s freshwater in a year, hovers at just 6% of normal. 2015 looks to be a very dry year. Coupled with these dim projections is the estimation that there remains only one year of water left in storage in California’s reservoirs, as NASA scientist Jay Famiglietti wrote about in a Los Angeles Times op-ed  earlier this month. Famiglietti called for immediate water rationing in order to confront the challenges of what has been the driest winter since California began keeping records in 1895, a situation so dire that, as Famiglietti put it, “we’re not just up a creek without a paddle in California, we’re losing the creek too.” Governor Brown’s unprecedented mandatory restrictions on water use are a step in the right direction, but they are ultimately an insufficient response to this current drought and fail to address the deeply rooted issues of water management in the West.

California’s new restrictions include the replacement of fifty-million square feet of lawns with drought-tolerant landscaping, rebate programs for water-saving appliances, reduction of water use by large landscaped areas such as golf courses, cemeteries, and campuses, and tiered pricing structures for water bills, among others. These restrictions, which will be implemented by the State Water Resources Control Board, place the onus of conservation on municipalities and homeowners, though these consumers represent only about 20% of freshwater use in the state. Notably absent from these cuts is the agricultural sector, which accounts for 80% of freshwater use in California. In dry years, agriculture pumps groundwater to make up for a lack of precipitation and snow runoff, but groundwater is a finite resource. Groundwater levels, like snowpack levels, are also at an unprecedented low and new pumping restrictions will not take effect until 2020. Underground aquifers also take a very long time—decades to centuries—to recharge, and overdrawing this resource is a shortsighted and temporary fix to a problem that needs long-range, sustainable planning.

The bind in which the West now finds itself does not come as a surprise to those who have studied the history of Western water development. Many a water historians has warned that the current system, built on a promise to build a Garden of Eden in a desert coupled with a heavy dose of hubris, will fail if we remain unwilling to rethink the way we live in such an arid landscape. Marc Reisner opens his classic history of the West’s water, Cadillac Desert: The American West and Its Disappearing Water (1986), with Percy Bysshe Shelley’s poem “Ozymandias,” a tale of caution against a prideful belief in invincibility. Reisner argues that American ignorance of the arid West’s environmental limits and a blind desire to build a fertile society in the region will ultimately be the undoing of the West as the supply of water will prove unable to keep pace with the region’s growth.

Equally as prescient, Donald Worster’s Rivers of Empire: Water, Aridity, and the Growth of the American West (1985) argues that the West was built on an illusion of control of the natural world that has worked for a short period of time, but whose collapse is inevitable. As Worster writes, though the West eschews emperors themselves, it craves empire: “a condition of absolute sway, supreme command, undisputed control over nature that would give front rank, not to any one individual, but to an entire people, their values, and their institutions” (p.261). This mentality has resulted in a precarious system of water control and distribution that threatens to unravel when the realities of climate and aridity cannot be overcome by the engineering of the kinds of large-scale water projects we’ve seen in the twentieth century. After all, as Worster reminds us, “if history teaches us anything unequivocally about empires, it is that sooner or later they begin to falter” (p. 261).

Though published three decades ago, these books’ predictions prove frighteningly accurate today. Yes, in the face of what could be a megadrought, we need water restrictions such as the ones mandated by Governor Brown. But these are not enough, as Reisner and Worster make clear, and we should use the time such restrictions buy us to take a long, hard look at the history of our current predicament. As historian Elliott West wrote in his The Contested Plains: Indians, Goldseekers, and the Rush to Colorado: “environmental history is, among other things, a lengthy account of human beings over and over imagining their way into a serious pickle” (p. xxii). If we can understand the imaginings of our past and their consequences for our present and future, we just might imagine our way out of this particular pickle (and give us enough time to create a new one).

2 thoughts on “California’s Response to Historic Drought: Too Little Too Late?”