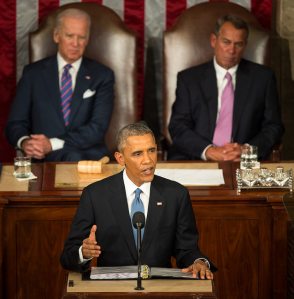 Erstwhile’s Keith Aksel discusses the foreign policy significance of the 2015  State of the Union Address.

This past January, the nation tuned in to President Barack Obama’s State of the Union Address. His discussion of foreign policy, though unsurprising overall, included one specific note of historical relevance. Along with his overtures toward global “coalition building,” and warning against “rash” decisions in the face of global crises, Obama directly engaged cybersecurity as a specific foreign policy aim. The digital age requires unprecedented levels of attention to cybersecurity, a challenge that Obama has had to face repeatedly as the sitting president. His remarks on the issue underline that threat:

No foreign nation, no hacker, should be able to shut down our networks, steal our trade secrets, or invade the privacy of American families, especially our kids. We are making sure our government integrates intelligence to combat cyber threats, just as we have done to combat terrorism.

As Obama’s reaction to the recent North Korean hack of Sony Pictures illustrated, cybersecurity does indeed extend into the realm of US foreign policy. Cyberattacks threaten US security, but also make up a crucial part of our nation’s foreign policy arsenal. The 2009 American cyberattack on Iran’s nuclear program, which sabotaged Iranian nuclear equipment, was itself proof that cyber warfare can in fact be used to reach US policy aims.

Technical warfare in the form of cyberattacks certainly existed before Obama’s time. However, his administration has presided over an unprecedented uptick in such attacks from foreign countries, threatening more than just the physical security of the American people. These challenges, which would have been unfathomable to presidents in the 1920s, are now challenges to be confronted by every president hereafter.  Although historians will decide Obama’s significance in foreign policy over the next decades (will he be a Carter or a Roosevelt?), it seems that the digital age presents problems that will play a part in defining those legacies for all succeeding presidents.

One thought on “Foreign Policy in a Digital Age”