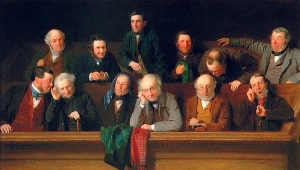 The Jury, by John Morgan

Last week, a grand jury in Ferguson, Missouri, delivered a verdict of No True Bill regarding the pursuit of charges for Officer Darren Wilson, who shot and killed unarmed 18-year-old Michael Brown in August of this year. There has been a lot of ink and pixels spilled over the events in Ferguson. From the manner of Michael Brown’s death, with some witnesses saying that he tried to surrender and others saying that he tried to charge the police officer, to the racial composition of Ferguson’s population—mostly black—and the police force tasked with protecting it—mostly white.

Less has been written on what a grand jury is, what it does, and why this one was rather unusual.[1] A grand jury is part of criminal procedure, the rules by which criminal charges are prosecuted and defended against. In Missouri, local prosecutor Robert McCulloch could have charged Darren Wilson with a crime, but, instead, he asked a grand jury to decide on the indictment. In the words of Supreme Court Justice Antonin Scalia, the grand jury’s historical role is that of “an accusatory body that sits to assess whether there is adequate basis for bringing criminal charge into an adjudicatory body that sits to determine guilt or innocence” (United States v. Williams, 1992). The grand jury’s purpose is to evaluate the prosecution’s case and decide whether or not there is sufficient evidence to go to trial. The grand jury needs not worry about the defendant’s guilt beyond a reasonable doubt, rather it need only find that there is probable cause that the defendant committed the crime—a much lower standard. The grand jury is the prosecution’s animal and it’s meant to be such. The implications of this go further: since the grand jury is solely the domain of the prosecution, the defense is barred from presenting exculpatory evidence and United States v. Williams decided that the prosecution too has no such obligation.

The grand jury in Ferguson was unusual for several reasons, the first being its verdict of No True Bill—meaning that out of the five charges it could have brought against Darren Wilson, it found none. A study by the Bureau of Justice Statistics found that “U.S. attorneys prosecuted 162,000 federal cases in 2010… [and that] grand juries declined to return an indictment in 11 of them” (FiveThirtyEight). Another (the reason that has lawyers across the country scratching their heads) is that Robert McCulloch presented “all of the physical evidence gathered, all people claiming to have witnessed any part or all of the shooting, and any or all other related matters” to it (Video of the Robert McCulloch Press Conference). Where normal grand jury proceedings might take an hour or perhaps several hours, Robert McCulloch presented 70 hours of testimony over the course of a month, calling several dozen witnesses in the process.

Having the defendant, in this case Darren Wilson, testify before the grand jury is uncommon but does happen.[2] It’s rare because it’s a great opportunity for the prosecutor to trip a defendant up and so defense attorneys will only allow their clients to testify to a grand jury under very special circumstances. It’s even rarer to find prosecutors step so lightly with accused, as MSNBC Legal Analyst Lisa Bloom pointed out, especially given this informative breakdown of witness statements. All of these irregularities taken together have lead many critics to claim that Darren Wilson’s special treatment came from his status as a police officer and Robert McCulloch’s use of the grand jury to avoid the political firestorm of not actually wanting to prosecute him.

None of this is to say that Darren Wilson is guilty or not guilty. By avoiding trial, Americans have been presented with “all the evidence,” but with no adversarial interpretation by a rigorous prosecution and a zealous defense—the basis of US criminal law.

[1] The New Yorker has an excellent article on Ferguson and grand juries.