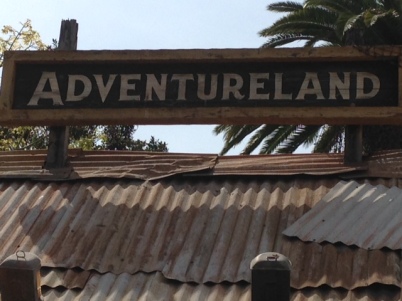 This week, friend of the blog, Travis R. May (Ph.D. student, University of Colorado Boulder), talks Disneyland and the exoticization of the tropics.

Just ahead, a rickety wooden bridge crosses a narrow stream, and the footpath beyond leads into a primitive village of wattle-and-daub buildings crowned with high thatched roofs. Tropical birdcalls and animal growls echo mysteriously through the lush greenery of the encroaching jungle ferns, bamboo shoots, and hardwood trees, the oldest of which tower like cyclopean sentinels over the primeval forest. Strange insects buzz and hum from the periphery of the clearing, where a trader’s post has been established to European specifications and a tramp steamer rumbles idly alongside a riverfront quay. Obscuring mists waft through the humid air and, in the distance, a cacophony of drums rolls ominously like a long peal of thunder.

The sensory experience depicted above is meant to evoke the strange, the mysterious, and, above all, the exotic. It is a description that could only be deployed in explaining and describing the non-European world; the last “tribal” drum cacophonies in Britain and much of the rest of Western Europe have been silenced by well-armed and well-disciplined Roman legions two millennia ago. But these are not the “uncharted” rainforests of the Congo Basin, the “dark heart” of the African continent as experienced by nineteenth century European explorers like Dr. David Livingston and Henry Morton Stanley. Nor is this a description of the sweltering jungles of the Indian subcontinent or of Southeast Asia, first penetrated by British and French explorers in the eighteenth and nineteenth centuries. This is a vivid memory of my very American childhood. Welcome to modern-day Anaheim in sunny Southern California, home to Walt Disney’s first amusement park and its many “themed lands.”

Adventureland, as this subsection of Disneyland is known, is a painstakingly and purposefully built homage to Europe’s late-nineteenth and early-twentieth century colonial enterprise in the tropical world. The seemingly ancient “trees” here are reinforced with rebar and concrete, and the primitive sounds of the jungle are broadcast via hidden loudspeakers. It is a carefully manicured illusion of a time and place when a white man (or, much less frequently, a woman) could abandon the drudgery of urban life and light out for the colonies to seek fortune and glory. Disney is not hesitant to identify it as such, describing Adventureland as “a place where you can experience the thrill of exploring exotic lands, where every step of the journey is a foot further into the unknown.”

Despite the inauthenticity of the flora and fauna, there is a lasting power and energy in such a depiction, one that I distinctly remember feeling as a child as I set about exploring this artificial lost world. It brought to life the Kipling stories and adventure novels that I was then fascinated with; it made manifest a Victorian worldview of the hierarchical ordering of cultures – European at the peak, all others far below. As a glorified celebration and fetishization of the exotic and the Other in popular culture, Adventureland has few peers of such wide renown or enduring legacy. 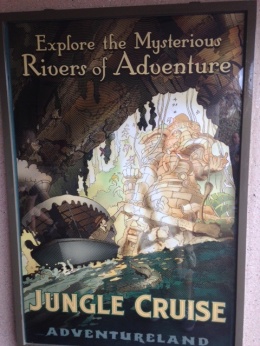 The ride at the heart of Adventureland from its inception – The Jungle Cruise – was one of the original attractions to open in Disneyland on the very first day of the park’s operation: July 17th, 1955. This was a full twelve years before the opening of the much more famous Pirates of the Caribbean ride, making it a significantly more logical choice than the latter for Ian Malcolm’s wry observation in Jurassic Park that “at least malfunctioning animatronics do not eat people” (the same cannot be said, alas, for dinosaurs). The electronic and hydraulic mechanisms powering the robotic animals and people on the ride that appear antiquated and janky to today’s audiences then represented state of the art of animatronics technology. The roaring lions and trumpeting elephants of the Jungle Cruise must have been a revelation to the park-goers of the 1950s. This is perhaps not all that surprising, given that most of the earliest wave of park-goers were presumably accustomed to seeing the real-life counterparts of these animals languish in depression and squalor behind steel bars in concrete pens in the zoos of the era. Many of America’s zoos had not yet implemented revolutionary “cageless” and moated natural exhibits begun by the San Diego Zoo only a decade or so earlier.

The date of the park’s opening is also significant for another more sobering reason. The Jungle Cruise began operations two years before any colonized African country gained independence from the principal European imperial powers of Great Britain, France, and Portugal (Ghana gained its independence first in 1957 from the British Empire, setting off a chain reaction of events that led to the near-total British withdrawal from Africa by the early 1960s, followed shortly thereafter by the French and somewhat later by the Portuguese). The vision presented, then, while a fantastical one in certain respects (most notably by the absurd amalgamation of several of the tropics’ largest rivers – in reality separated by many thousands of miles – into one uninterrupted chain), was not far removed in any sense from the experience of colonization as it was then perceived by white westerners

“Natives” and “bushmen” could unproblematically be displayed as menacing, barbaric, and vaguely hallucinatory apparitions of the forest, much as the Mau Mau rebels in Kenya were then being portrayed by the European press, perched silently among the trees with shields and spears as the ride’s steamships (heavily loaded with connotations of western technological and civilizational supremacy) pass rapidly by. The implication that the “people” lining the riverbank, inherently dangerous and irrational, are not fit for self-rule or any sort of responsibility, in stark contrast with the westernized passengers onboard the ship, is as inescapable now as it must have been then. 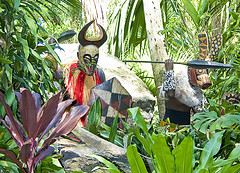 The final animatronics display of the seven-minute journey down the Frankenriver, past the fantastical depictions of the most notable megafauna of several distant continents, is of a grizzled headhunter known as Trader Sam presenting his macabre wares to the park-goers for inspection. This last encounter before a return to the park proper and civilization, like the rest of the experience, is now played for laughs by the ride operators – “Sam’s offering a two-for-one special: two of his, for one of yours!” – but what the contemporary audience is meant to be laughing at is not altogether clear: the wit of the word play, the absurdity of the ancient lumbering machinery, no longer convincing as a human facsimile, or the primitiveness and otherness of the (racially and
morally) black ghoul, beckoning leeringly with his sack of shrunken heads? 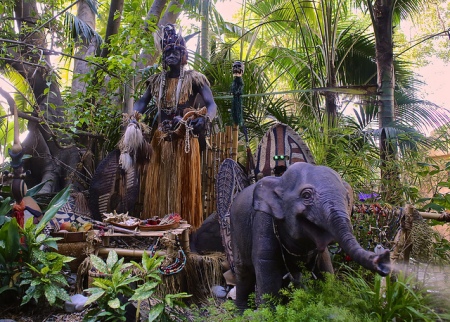 That the Jungle Cruise and Adventureland are now relics of another era is a point that few would contest. One can perhaps understand how audiences of the 1950s, awed by the new technology on display and living in an era before the groundswell of the civil rights movement in our own country and before the end of European colonialism in the tropical world, would appreciate this unrepentantly racist park experience unreflectively. But how does their continued popularity in the present day reflect upon on those who still attend and enjoy the park and upon our society at large, which seems to condone such an obviously outmoded depiction of distant places, cultures, and peoples without so much as a second thought? The answer, perhaps, is one that many of us would not proudly or openly admit today: although western colonialism and formal imperialism in the tropical world are now the ruins of a bygone era, the mystery of the unknown and the allure of the exotic still cast a mesmerizing spell over our common conceptions of these places. And when we revel nostalgically in the likes of the Jungle Cruise and Adventureland, we are complicit in propagating this unhealthy, atavistic fantasy.

This is not to suggest that this is a conscious decision on the part of contemporary audiences: these lands remain untamed and uncharted in our minds, much as they did a half-century ago, precisely because we are taught so little about them and exposed so rarely to them in our day-to-day lives, except in the context of the tragedy of incurable infectious diseases and the horror of ethnic violence and civil war as presented by the (largely western-dominated) international media. This is a failure not only of our press and our educational system, which all-too-often relegates the tropical world to the margins as the narrative focuses on a teleologically ascendant Europe driving ever forward towards modern civilization, but also of historians who approach the study of these lands and peoples only from the perspective of the Europeans who “explored” and “discovered” them. Until we seriously reevaluate our society’s relationship with the tropical non-western world, and our troublingly simplistic and romanticized impressions of it, yet another generation of impressionable children on vacation will be quietly inducted into the insidious status quo, and the Walt Disney Company will continue to make a tidy profit at the park ticket box office in the execution.

Have a question, comment, or suggestion for Travis? Leave it all below!

One thought on “Jungleland: Disney’s Theme Parks and the Allure of the Exotic”