Managing Editor Julia Frankenbach offers a poem seven years in the making. Originally composed in the author’s sophomore year at Mount Holyoke College, the poem has endured flurries of adjustment, gradually rooting itself in the northern California landscape as the author focused her studies there. Like the unpredictable layering process for British artist Rebecca Vincent’s original monotypes (feature image), this poem is the result of an evolving vision. In its present form, it is about the physical pull of origins and the startling absence of indigenous, colonial, and Mexican-era California histories from national public memory. 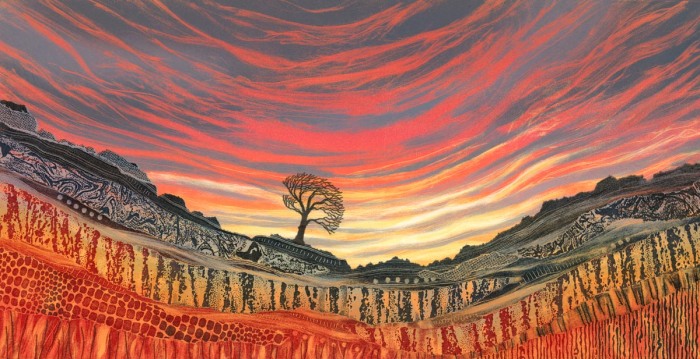 Here on the hummock,

the lichen everywhere is russet in the sun.

There is so much air for us,

and in our reverie

our legs are in the rock

so that we knee the stilled remains of the stories

in fungal chambers of the earth.

Sinking still, our cheeks are the darkened land

where the notion of Califia and her black queens

broke apart on the shoals of a

Here lies a wreck of ancestry.

Our ribs hold in the breccia

of lives crushed among the acorns.

Our arms rest in the cool basalt

pinned by the weight of oceans

and the tallow cargoes they carried.

On our shoulders we bolster the granites

That studded the streams

and enriched the continents.

Kneeling to the arc of a buckling crust,

across we cut, and we are molten,

solid at the center, heat churning the vital fluid,

We are flying through darkness,

sunlight on our back.

and all is great pressure and speed and noise,

And we are small.

A node of energy, balled together: flung.

Walking the lichens, one senses

there is a body here.

And still we rummage our soils for the future;

the stories are yet within reach, though,

if we can ever get around to the right kind of digging.

4 thoughts on “The Right Kind of Digging (A Poem)”